Just as Aspyr Media and Activision teamed to bring Guitar Hero III: Legends of Rock to the PC and Mac following the $1 billion title's console effort, so too are the companies teaming on Guitar Hero World Tour. The two said today that the four-piece rhythm game will arrive for desktop platforms this summer. 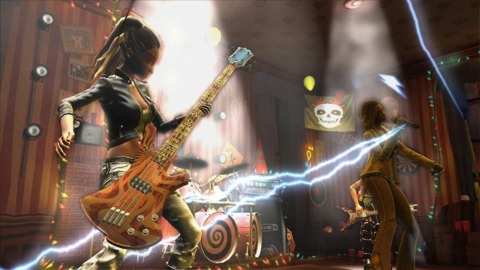 Like the console editions of World Tour, the PC and Mac versions of the game will feature 86 on-disc tracks, from the likes of The Eagles, Van Halen, Metallica, Michael Jackson, and The Doors. GameSpot's previous coverage has full details on the complete set list. Aspyr did not indicate whether the PC and Mac editions would support downloadable content and had not responded to requests for comment as of press time.

New this year, the PC and Mac editions of World Tour will offer wireless controllers, of which drums, guitars, and a mic will be available. The desktop-gaming versions of the title will also offer a variety of online and offline gameplay modes, as well as the song-creation feature Music Studio.

For an idea of what to expect from Guitar Hero World Tour on PCs and Macs, check out GameSpot's full review of the console editions of the game.