Activision to bring a dose of nostalgia to the popular game series, with 30 tracks from the era including originals from Flock of Seagulls, Twisted Sister.

One of the worst-kept secrets in the games industry is finally out. After weeks of rumors, Activision has finally confirmed that Guitar Hero: Rocks the 80s is in the works. So far, the game has only been confirmed for the PlayStation 2 and will take the retail stage in the US and Europe sometime this summer.

Seven songs out of the total 30 have so far been announced, but they run the genre gamut. It will feature "as made famous" covers of "Round and Round" by Ratt, "I Want Candy" by Bow Wow Wow, "Metal Health" by Quiet Riot, "Holy Diver" by Ronnie James Dio, and "Heat of the Moment" by Asia. It will also sport two original tracks: Flock of Seagulls' "I Ran" and "I Wanna Rock" by Twisted Sister. The game will also feature retro rock venues, unlockable guitars, and a variety of "intense" gameplay modes.

RedOctane's head of publishing, Dusty Welch, commented, "The 80s features an amazing variety of rock genres from hair metal to punk to new wave, and our dedicated Guitar Hero fans will definitely appreciate the opportunity to play all the new and exciting content we've added."

One thing Welch didn't comment on was the fact that Guitar Hero: Rocks the 80s is being developed by Harmonix. Though it developed the first two guitar heroes, the rhythm-game studio has since been purchased by MTV, and announced in March it is making a Guitar Hero rival called Rock Band which will be marketed with the help of Electronic Arts. Activision-owned Neversoft, maker of the Tony Hawk series, has since taken over Guitar Hero development. It will presumably be making Guitar Hero III, due out later this year for the PlayStation 2, PlayStation 3, Xbox 360, and Wii.

RedOctane founder and president Kai Huang had previously confirmed to GameSpot that the company would be looking to work on a variety of different genres for upcoming Guitar Hero, and that one of the options would be to offer these packs as extra downloadable content. However, the PS2 edition of Guitar Hero: Rocks the 80s edition will be coming out in the more traditional boxed format. 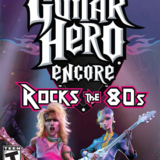 There are 372 comments about this story
Load Comments (372)