To help bolster sales of Guitar Hero 5, Activision unveiled a promotion allowing customers who picked up the rhythm game in its first month on sale to send in proof of purchase and receive a free copy of Guitar Hero: Van Halen. The promotion applied only to specially marked copies of the game purchased by October 1, though gamers have until October 31 to get their submission to Activision.

Less than a week after the promotion's end, the first copies of Guitar Hero: Van Halen have begun shipping out to gamers. The copies of the game arrive in a single-disc sleeve rather than a normal DVD-sized case, and recipients are directed to the game's Web site to download the manual. However, the sleeve does have the unique owner ID code printed on it, so players will still be able to export the game's 44 tracks to other Guitar Hero titles.

In addition to the game, recipients get some ads for the rest of Activision's Hero lineup of rhythm games, as well as a letter from RedOctane founder Kai Huang. The note thanks customers for their loyalty, saying, "We hope you have as much fun playing these incredible games as we do making them," a perhaps unwitting reference to comments recently made by Huang's boss, Activision CEO Robert Kotick. Addressing an audience of analysts last month, Kotick made headlines for expressing--among other things--his desire to "take all the fun out of making video games."

Those who missed out on the Guitar Hero 5 promotion will still be able to get their hands on Guitar Hero: Van Halen, though they will have to wait a while. Activision's official retail release date for the game on the Xbox 360, PlayStation 3, Wii, and PlayStation 2 is December 22. 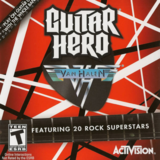