Guitarist Brian May's comments pin the release of a Queen-specific title for 2011.

While both Guitar Hero: Warriors of Rock and Rock Band 3 will use Queen's "Bohemian Rhapsody," fans of the heralded rock group might have more to enjoy next year.

Speaking with Swedish news site DN.se, Queen guitarist Brian May let slip the next band-specific music game from Activision. When asked about Guitar Hero: Queen, May confirmed the game's existence but kept mum on the project. He revealed only that the game will release in 2011 and will let users participate in the band's concerts.

This isn't the first time May has let loose details on the band's intent to appear in a band-specific music game. Preceding the release of Lego: Rock Band, a game in which some of the band's songs were featured, May said there was talk "behind the scenes" about a dedicated Queen Rock Band title.

Queen is no stranger to the self-titled music-game phenomenon though. SingStar: Queen, a karaoke title that released last year for PlayStation 2 and PlayStation 3, featured 25 songs from the band's career and was warmly received. 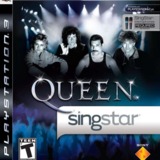 There are 191 comments about this story
Load Comments (191)