Earlier today, Activision reported nearly $3 billion in earnings for its 2008 fiscal year. The company called out Guitar Hero III: Legends of Rock as being the number one game in terms of revenue in the US and Europe during the 12 months before March 31, 2008. It also promised more profits from the franchise, thanks in part to the forthcoming June 29 release of Guitar Hero: Aerosmith for the Wii, Xbox 360, PlayStation 2, and PlayStation 3. 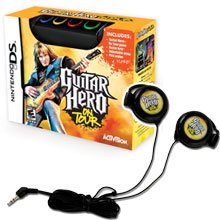 During a conference call with analysts afterward, Activision publishing president Mike Griffith also talked up Guitar Hero: On Tour, the first iteration of the game for the DS. "[It's] a breakthrough peripheral-based game for the Nintendo DS that brings the Guitar Hero experience to the 41 million DS users in North America and Europe so they can play Guitar Hero anywhere, anytime," said Griffith.

Then, he revealed the game--previously announced only as a $49.99 stand-alone edition (pictured), will also be available bundled with the DS hardware itself. All three versions of the game will launch on June 22. "Nintendo has been impressed with [On Tour's] innovation," he said.

Speaking of innovation, Griffith also used the conference call to drop a massive tease about what's in store for the Guitar Hero franchise. "For the holiday, we'll provide a significant leap forward in innovation for Guitar Hero worldwide on all platforms including the PS3, PS2, Xbox 360, Wii, and again on the DS," he said cryptically. "We'll provide more information detailing this specific innovation in a couple weeks."

Later, an analyst asked Griffith directly if Activision was considering adding other instruments to the Guitar Hero franchise soon, or if the publisher was "still in wait-and-see evaluation mode." The executive demurred, saying, "We've put a lot of additional development resources, a lot of additional music licenses resources, a lot of additional hardware supplier resources against the title to fuel growth over next year. We're excited by the increased musical content and innovation we're bringing. We do expect a leap forward in innovation with our holiday launch, and we're about two weeks away from providing very specific details on that."

Still, Activision's vagueness is odd, given the fact its CEO, Bobby Kotick, recently stated publicly that the publisher was planning to bring both instruments and vocals to the Guitar Hero franchise.