Sammy's fighting game will arrive on Microsoft's console with online support this winter in Japan.

TOKYO--According to Japanese Web site Softbank Games, Sammy will release the Xbox edition of Guilty Gear Isuka in Japan. The fighting game is slated for release on December 16 at the price of 5040 yen ($46).

Guilty Gear Isuka was originally released in the arcades and was ported to the PlayStation 2 in July (a stateside release is scheduled for November). The game features a four-player battle where players and/or computer opponents can engage in free-for-alls or team-based matches. Characters can switch between fighting in the foreground of the stage or the background, a feature that can be used to strategically avoid the opponent's moves.

The Xbox edition of Guilty Gear Iskua will allow online playing via Xbox Live. The color edit mode and GG Boost side-scrolling action game mode are confirmed to be in the Xbox edition. Whether the game has the other bonuses that were in the PS2 edition, such as the new character A.B.A or the Robo-KYII customization mode, has not been confirmed. 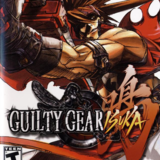