If you owned a Saturn back in 1996, odds are you have fond memories of Guardian Heroes, the excellent side-scrolling brawler with role-playing-game elements from beloved developer Treasure. Besides the simple fact that it was an absolutely stellar example of how traditional 2D side-scrollers could be enhanced with some new gameplay wrinkles and technology, it was a great showcase for the Saturn's 2D muscle. Fast-forward to 2011 where, 15 years later, the game still has a place in the hearts and minds of gamers, many of whom consider it one of the greatest games for Sega's console.

The game's enduring popularity led to a portable sequel, Advance Guardian Heroes, for the Game Boy Advance and aimed to capture the magic of its console predecessor on Nintendo's handheld. Fans of the original game, a demanding bunch, have continued to ask for a console sequel to the Saturn game. While Sega and Treasure aren't delivering on that particular wish just yet, fans hoping for the chance to the play the classic game again without hauling out their Saturn consoles and dealing with standard-definition visuals are finally having their pleas answered later this year. On a recent trip to Japan, we had the chance to visit Treasure's office for the first look at Guardian Heroes HD, an upgrade of the original game for Xbox Live due later this year, which adds online play.

If you missed out on the original game, we'll offer you some essentials on the ambitious and surprisingly progressive action game of yesteryear. Guardian Heroes hit the Saturn in the US in January of 1996, eight months into the system's troubled life. At first blush, the game appeared to be just another side-scrolling brawler, but once you actually played it, you quickly found that there was a lot going on there that set it apart from other games. You played as one of five heroes--four that were initially selectable and one that you could unlock--who fought to save humanity from an evil wizard named Kanon. While this involved much mashing of buttons to fight off hordes of enemies, Guardian Heroes introduced some very cool RPG twists that put a fresh spin on the time-worn brawler formula.

Defeating enemies yielded experience that players could allocate to six different attributes to improve their combat skills. Combat took place across three planes--foreground, middleground, and background--which gave depth to the 2D action. Players were also able to give basic orders to an undead warrior non-player character that would assist in combat. One of the most intriguing gameplay mechanics in Guardian Heroes was the branching path system in the Story mode. While the notion of changing the way a game unfolds based on player choice is old hat these days, back in 1996, the ability to make choices that affected the levels and bosses you played, as well as dictated which ending you got when finishing the game, was an exciting addition to the genre that no one was really doing at the time. In addition, the game featured a Versus mode for up to six players on the same console, thanks to the almighty Saturn multi-tap. The simple mode let you use the main characters, as well as unlockable characters you encountered in the game, which included bosses and assorted monsters for a total of 45. The game found a loyal and rabid following that, unfortunately, didn't number high enough to garner it big sales.

Despite the game's unspectacular sales, there's something to be said for a loyal and vocal fan base. Developer Treasure has been keenly aware of fan interest in the game throughout the years, and given the success of its previous digital releases, it opted to revisit Guardian Heroes. The team, with many of the original staff members that made the original, rebuilt the game to include higher-resolution visuals, as well as online compatibility with the Story and Versus modes. The team is also including a difficulty setting to allow players to have the classic experience offered by the original game or to try out a new, arranged mode that features some refinements to the game's AI.

We had the chance to visit Treasure to try a work-in-progress version of the game to see how it is coming together. The visuals were obviously our big point of interest, and we were mostly happy. Anyone who's played the original Saturn game knows that the game's massive, scaling sprites could become unattractively chunky at times. While Treasure hasn't done a total art overhaul on the visuals, the team has done some work to enhance the original graphics that's a mix of higher resolutions and an artsy, almost cel-shaded, layer. For purists who want their chunky classic graphics, it will be possible to toggle off the enhancements and use the original sprites. We tried out the totally insane battle mode that's been upgraded to support 12 players, human or AI. Even though the original battle mode often seemed like sheer madness, this is even crazier. The mix of small and massive characters, coupled with crazy visual effects is hectic.

Guardian Heroes HD is looking like a fun trip down memory lane that we're anxious to take. The game may not be a full-on HD revamp of the original, but being able to play the game without hauling out the old Saturn and the added online functionality make it appealing. Guardian Heroes HD is currently slated to be released on Xbox Live this summer. Look for more on the game in the weeks to come. 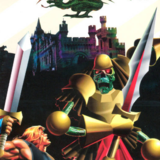