Yesterday's Take-Two Interactive earnings report grabbed headlines for a variety of reasons. It was bundled with news that the New York City-based publisher had signed Rockstar Games cofounders Dan and Sam Houser to contracts that will keep them around through 2012. The company reported record profits for the year even though its fourth fiscal-quarter (which runs August-October) earnings fell below expectations, which sent its stock spiraling southward. As of press time, Take-Two shares had dipped below $9, more than $3 below its Wednesday closing value, and roughly $17 less than Electronic Arts' February buyout offer. 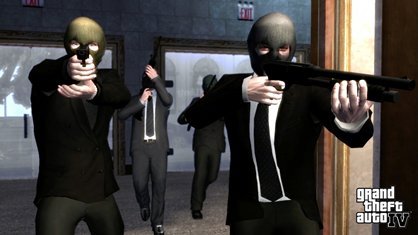 In a conference call with analysts, Take-Two executives revealed that the company's 2K Games label would no longer be publishing Champions Online. They also divulged some other nuggets of information about exactly how important the GTA series is to the company's bottom line. CFO Lainie Goldstein revealed that the felonious franchise accounted for 60 percent--or $710 million--of Take-Two's earnings for the fiscal year ended October 31.

In the aforementioned underperforming fourth quarter, GTA games generated 40 million, or 17 percent, of the publisher's sales. For its 2009 fiscal year, Take-Two expects 45 percent of income to come from Rockstar and 55 percent from its 2K label. Of that 55 percent, 25 percent is expected to come from 2K Sports (NHL 2K10, NBA 2K10), 20 percent from 2K Games (BioShock 2, the Civilization series), and 10 percent from the 2K Play casual brand.

Given GTA's sustained popularity and the Wii's increasing ubiquity, many analysts have wondered aloud if the series will ever come to the console. One such analyst put the question directly to Take-Two chairman Strauss Zelnick during yesterday's call. In response he offered an at times apparently contradictory message.

"We've got a bunch of sports titles that are going to take advantage of the Wii, [but] some of our best content really isn't appropriate for the Wii," explained Zelnick. "Frankly even for the M rated content that we think is much more appropriate for the PS3 or 360, we have to look at the Wii as a viable platform across all our labels. We have to because you can't ignore the install base. You just can't." Curiously, no mention was made of Manhunt 2, Rockstar's first M-rated game released on the Wii.

Zelnick went on to explain that Take-Two views the forthcoming Grand Theft Auto: Chinatown Wars--due out March 17--as a test case. "We're going to do a lot of learning with GTA Chinatown Wars on the DS in terms of bringing that kind of content to a Nintendo platform. Our partnership with Nintendo is as strong as it's ever been. We're excited about it. We talk to them all the time. They provide great feedback for us. We're highly focused on it."

There are 249 comments about this story
Load Comments (249)