Play It announces that it will release the PS2 version of King of the Jungle's slot car racing game in Europe in December. First screens inside.

Play It has today announced that it will release the PlayStation 2 version of Grooverider in Europe in December. The game, which is currently in development at King of the Jungle, will allow players to race slot cars around 20 different circuits set in dining rooms, bedrooms, living rooms, kitchens, and roof gardens.

"Grooverider combines stunt and slot cars in an electrifying high-voltage package, which combines the best in racing moves with the modern advances demanded from today's gamers," said Mark Cale, president of Play It. "It's a fab package of thrills and rides, which, combined with an attractive price point, is sure to delight console gamers and race enthusiasts alike."

Solo players will be able to race in arcade and championship modes, and Grooverider will also feature split-screen support for two players. Grooverider will sell for just 9.99 pounds ($16) in the UK when it's released in December. We'll bring you more information on the game as soon as it becomes available. 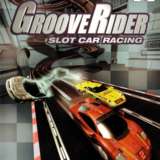