Gretzky hits the ice on the PS2

The Great One may be stuck behind the bench in Phoenix this year as the Coyotes' new coach, but he's still lacing up the skates and lighting the lamp in the lucrative licensed likeness market. Sony Computer Entertainment America today announced that Gretzky NHL 06 for the PlayStation 2 is now available in stores across the country, with all the new NHL rules, a new Wayne vs. Wayne mode, and an exclusive AHL license.

With a focus on arcade-style gameplay, Wayne vs. Wayne mode lets players earn "99 Time," which gives them a playable Gretzky for a temporary teammate. If 99 Time is earned enough times in a game, the player gets to throw five Gretzky clones on the ice for a truly dominating squad (albeit one which is decidedly lacking on the goon front). On the simulation side of things, Gretzky NHL 06 touts tweaked artificial intelligence, on-the-fly strategies, and a new team chemistry system.

Developed by Page 44 Studios, Gretzky NHL 06 retails for $39.99 and is rated E10+ for Everyone 10 and Older. A PSP version of the game is scheduled to ship in October. Check back with GameSpot later for a full review. 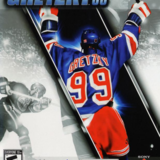