Lead singer tells radio station the Bay Area punk band is getting its own full-fledged installment in Harmonix rhythm series. 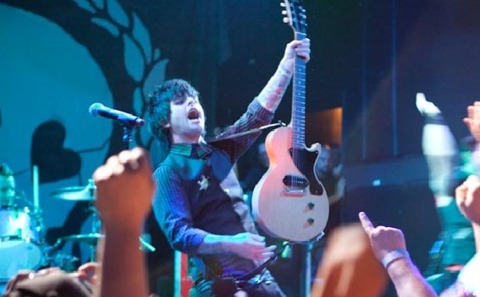 As for when that will happen, Armstrong said, "I'm not sure. Soon. Not like this week soon, but this year soon. I think by the end of the year."

News of band-specific rhythm games leaking out before official announcements is fast becoming a tradition. Joe Perry leaked word of Guitar Hero: Aerosmith, while Activision CEO Bobby Kotick had only himself to blame for tipping people off to the company's next band-centric effort, Guitar Hero: Van Halen.

So assuming Armstrong isn't delusional, the question becomes what form exactly this Green Day Rock Band project will take. That question is made all the more difficult to answer since musicians aren't always known for choosing their words carefully.

After all, when Perry told Billboard.com about Guitar Hero: Aerosmith, the site was left with the impression that the game in question was Guitar Hero IV instead of a spin-off project. And what fan of Jimi Hendrix could forget former Guns 'n' Roses guitarist Slash saying that Activision was "doing a Hendrix one," when the publisher's plans for the legendary musician were apparently limited to a pair of three-song downloadable content packs.

To date, MTV Games has announced only two band-specific retail products: last year's Wal-Mart-exclusive AC/DC Live track pack, and this year's Rock Band: The Beatles, which was touted at the Microsoft E3 press conference. Beyond that, bands such as The Who, Boston, and Rush have received tribute in the form of downloadable albums and compilations. Green Day would be a natural choice for a downloadable album (perhaps the band's new release, 21st Century Breakdown) or extended song pack, but a full stand-alone game sounds like a bit much. After all, it's unclear if the Wal-Mart-exclusive AC/DC experiment was successful enough to justify retail releases for any single band shy of the stature of The Beatles or Metallica.

The official story: A Harmonix representative had not returned request for comment as of press time.

Bogus or not bogus?: Green Day in Rock Band seems not bogus, but are they big enough to land their own game? Time will tell.