Take-Two's Myth II-powered tactical war game is on its way to stores.

Take-Two Interactive announced today that its latest squad-based strategy game, Green Berets, has shipped to stores. The game is powered by the Myth II game engine, and it features tactical warfare set in the jungles of Southeast Asia. Players control a group of soldiers in 10 different single-player missions that involve air assaults, POW rescues, sabotage, and fast-paced firefights. The game includes a variety of units such as M16 gunners, Huey helicopters, and 18 different hero units.

Green Berets also features a complete multiplayer mode that includes eight new maps and several game options like king of the hill, capture the flag, and body count. In addition, the game includes the full version of Myth II: Soulblighter, as well as a complete level editor that gives players the tools necessary to create custom levels, units, objects, and multiplayer maps.

Green Berets will soon arrive in stores for an approximate retail price of $19.99. For more information, take a look at our previous coverage of the game. GameSpot will post a full review of the game soon. 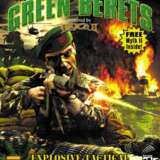