We have the first details about the next adventure game series from award-winning writer and game designer, Jane Jensen.

LEIPZIG, Germany--If you were a fan of adventure games in the late '90s, you're undoubtedly familiar with Jane Jensen, creator of the award-winning Gabriel Knight series of games. After Gabriel Knight was put to rest in 1999, Jane moved on to write books and help design small puzzle games such as BeTrapped. But at the 2006 Leipzig Games Convention in Germany, publisher Anaconda announced the first title in what seems likely to become a series of new adventure games from the mind of Jane Jensen.

Gray Matter is a point-and-click adventure game with supernatural themes. Dr. David Styles is a neurobiologist and widower who has isolated himself from the rest of the world after the death of his wife. Eventually, Dr. Styles hires an assistant, street magician Samantha Everett. Rather than the cooking, cleaning, or bookkeeping duties of the average personal assistant, Samantha is charged with tasks like finding test subjects for Dr. Styles' experiments. Eventually, everything takes a dark turn, and Samantha has to figure out what's really going on in the home of Dr. Styles.

In the game, you alternate between controlling Dr. Styles and controlling Samantha. Each character has special abilities that are required to solve certain puzzles. For example, Samantha is a street magician, so she can use sleight of hand to solve puzzles.

According to the publisher, the visuals in Gray Matter consist of 3D characters against 2D backgrounds. One of the concept images shows a detailed and seemingly innocuous bedroom of Samantha. In another concept render, you can see a high level of detail in the facial structure and texturing of one of the male characters in the game.

At this point, not much is known about Gray Matter except for it being developed under the direction of Jane Jensen. For many longtime fans, that's more than enough cause to be excited about this title. When speaking to Jane, she told us that she has many ideas in store for this series, and when asked about how lengthy the series could get, she said, "The possibilities are endless." We'll bring you more details as they surface, so be sure to check this page often for updates. 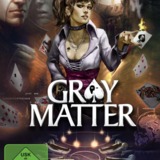