We play through the first few hours of what could be the definitive game for Sony's tech-heavy handheld.

Readers may recall a recent article on the PlayStation Vita that criticized the lack of "killer app" titles among other things. After playing through what seems to be the latest open-ended adventure du jour from Silent Hill director Keiichiro Toyama since his stint with Siren for the PlayStation 3, there may be a silver lining within all of the device's proclaimed gloom and doom. If the four to five hours we've spent in Gravity Rush was any indication of its quality, we could very well have both a sleeper hit and a darn great justification for buying a new gaming portable device.

To elaborate further on the last write-up, you play a girl named Kat who ended up in the town of Hekseville in nothing more than her unique one-piece uniform, a mission to rebuild the dying world of Auldnoir, and the awe-inspiring power to control gravity in her vicinity. Thanks to her black-glowing cat who tags alongside the blond heroine, Kat can float and fly around unreachable places, stand on the sides of buildings and any other flat surface in any position, use her stasis powers to carry objects and even human beings, and perform a gravity slide that turns her into the world's antigravity equivalent of Tony Hawk.

The latter technique required us to touch and hold the left and right edges of the screen; as she slid, we tilted the PS Vita left and right to steer her and shook the device to make her jump sky high. Kat can also speed up her gravity shift and descent by holding down the X button so that she can get to places quicker.

She will need all the help she can get because she's up against a group of black and red monstrosities called the Nevi that seek to eradicate all life on Auldnoir. These enemies come in many shapes and sizes, ranging from the small versions that fling black goo at our heroine to hulking brutes that can somehow elongate their hands to smash her to bits. The Nevi have a glaring weakness, however, as they have red glowing crystals that serve as their weak spots. If you hit them, they dissipate into nothingness. Some Nevis have more than one glowing crystal, and a few of them even have shell carapaces that require a good bashing before they can be damaged.

Kat is definitely a kitten with more than just an attitude and claws, as her repertoire of combat moves are simple yet effective. She can do a flurry of kicks when on the ground and can also dodge (via swiping the touch screen). To use her patented gravity kick where she floats in the air and speeds into full force feet first onto an enemy's weak spot, you make Kat float in the air and then press the square button.

The farther you are from your target, the more powerful the kick becomes. While you will need to aim at your target when using the kick, you don't need to be too precise as long as it's within the center reticle and the surrounding gray circle around it. Kat will automatically home in on the target upon launch.

When she uses her gravity stasis field to pick up objects, she can fling them at a target with a press of the circle button. Some enemies can dodge out of the way of a gravity kick, so finding nearby objects as makeshift projectiles is key during combat scenarios.

The coups de grace of Kat's arsenal are her special attacks, which can be pulled off by pressing the triangle button while in zero gravity mode. So far, we've unlocked her amped-up auto-homing gravity drill attack and another move where she summons a cluster of gravity projectiles to rain down and hit fools within her radius.

Do keep in mind that she can't float forever because there's a gravity meter that gradually empties the longer she stays in zero gravity mode. Luckily, the meter refills pretty quickly and there is an abundant supply of gravity crystals littered in the city that replenishes the bar in a jiffy.

Simply put, it's really easy to get the hang of the controls. Combat so far is a blast, as there's so much space to navigate and position yourself for gravity kicks, as well as knowing where your enemies are coming from. While standing upside down on areas during quests may take some time getting used to, the game's camera has done a great job of not disorienting our heads too much.

We have to confess that at times, we spent too much time flying around and checking out the scenic route, as well as perfecting our score with the game's side missions. Yes, there are side missions you can partake in while traversing around Hekseville. Gamers will come across energy canisters that require a small number of power crystals; these not only brighten up the area and make it cheery, but they also unlock combat and navigation trials that can earn you more power crystals.

The former requires Kat to kill off a number of enemies for points, while the latter requires her to reach checkpoint after checkpoint using a specific gravity technique. Power crystals that are earned can be used to upgrade Kat's gravity abilities, whether it is to make her gravity kick more effective or make the handling of her gravity slide manageable.

After a tutorial that came in the form of an intense scene where Kat rescues a boy from a black hole in the sky, we tarried off into the old district of Hekseville to forward the story along. Players will get to explore Hekseville in open-ended fashion in locales like the old city district and the perpetually nighttime Rainbow Street area.

Along the way, Kat has to re-create and restructure lost parts of Hekseville, help find a missing student by searching for clues and exploring an academy, and even fight against another gravity-shifting nemesis called Raven. Without giving too much away, Gravity Rush will also bring gamers to otherworldly areas like a planar space filled with broken-down ruins, a void filled with ceiling inferno pits and pathways suspiciously arranged like a roller coaster, and even a barren wasteland filled with giant Nevis where Kat's gravity meter can't regenerate.

What also elevates this adventure game is the aesthetics. Toyama mentioned before that the game's art was based on the style of French comics. Upon our initial impressions, the game impresses with its bright palettes and environmental designs, particularly at the later areas we mentioned briefly. The narration itself is a mix of cutscenes and comic panels. Players can switch to the next page by swiping the screen and even move the accelerometer of the Vita to check out different angles of the panel.

It's pretty unique, we must say, and adds to the charm of its French aesthetic while getting the story's point across without the need for drawn-out machinima. The soundtrack by Kohei Tanaka, who is famous for composing music for anime like Gunbuster and Nadia: The Secret of Blue Water, also accentuates everything coming together in one beautiful-looking title.

Fans may be disappointed that the director's latest game isn't anything like a survival horror title, but what we get instead is something potentially close to adventure-gaming greatness that couldn't be achieved on any other mobile device given its scope and presentation. With its unique sense of style and gravity-shifting gameplay already warming up to us, we do hope the later parts of the game live up to what we've experienced.

Gravity Rush will be out soon in North American and European territories, but gamers fluent in Japanese can check out the import version that is available now from their local parallel import stores. 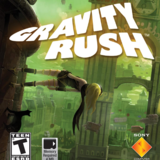