Grasshopper Manufacture partnered up with Kadokawa Games last year for Lollipop Chainsaw, an action game slated to be out this June. But the partnership isn't over just yet, as revealed by this week's issue of Famitsu (via Andriasang and Sinobu).

The magazine details a new game titled Killer Is Dead. The action game is about a man known as the Executioner, who is tasked with killing "S"-level criminals around the globe. Goichi "Suda 51" Suda will be directing the game. According to the companies, the game will retain the narrative style of Killer 7 and No More Heroes.

The game also acts as a dark homage to Ian Fleming's 007 series, complete with the title's version of Bond girls. Just like No More Heroes, the action title will have sword combat, albeit with new gameplay mechanics involved.

Killer Is Dead will be out for both the Xbox 360 and PlayStation 3 in 2013. For more information on the first game announced by the partnership, check out GameSpot's recent coverage on Lollipop Chainsaw. 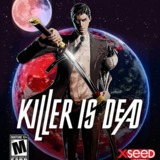