It will include basic road cars such as the Honda Accord and Ford Ka, through to supercars such as the Lamborghini Murcielago and McLaren F1. Famous courses such as the Nurburgring and Top Gear test track will also be featured. The publisher also confirmed that GT5's much-touted dynamic weather system will only work on 11 of the 71 tracks on offer, while five of the 71 will have the option for a night/day cycle. The full list of cars is available here, while the full tracklist is here.

Gran Turismo 5 was originally unveiled for the PlayStation 3 back in 2006. Since then it has faced numerous delays, missing its first shipping date back in March of this year where its release was put on indefinite hold, before later being delayed again past its November 2 release date.

"We sincerely apologize to GT fans for the delay," said Sony Computer Entertainment producer Taku Imasaki in a statement on the official PlayStation Blog at the time, when Sony promised the game would be in stores before Christmas. Retailers began listing the game for a 2011 release, before Polyphony Digital head Kazunori Yamauchi revealed that disks were already in production earlier this month.

For more on GT5, check out GameSpot's previous coverage. 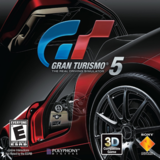 There are 781 comments about this story
Load Comments (781)