The PS4 has a great deal on a bundle that features both Resident Evil remakes.

If you haven't revisited Resident Evil's Raccoon City yet--or not at all--then the PlayStation Store has quite a deal on the Raccoon City Edition bundle. This digital package contains both Resident Evil 2 and Resident Evil 3 for $80, but right now, you can snag it on PS4 for only $44.79. The bundle is also available on Xbox One, though it is not currently discounted there.

Resident Evil 2 released in 2019 to widespread critical acclaim. It has players stepping back into the shoes of Leon S. Kennedy and Claire Redfield as they make their way through the Raccoon City Police Department, the city's sewers, and more. GameSpot awarded it a 9/10 in our Resident Evil 2 review, praising it for its "strong survival horror gameplay" and its "expanded story" that evolves the original game's narrative in some interesting ways. 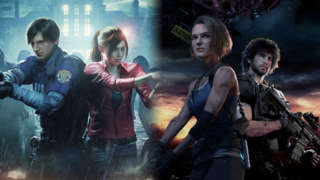 Resident Evil 3, on the other hand, released earlier this year. It revisits Jill Valentine's trek through Raccoon City as she's pursued by the seemingly unstoppable Nemesis. You'll take her through zombie-infested streets into a zombie-infested hospital and down into zombie-infested labs--look, there are a lot of zombies. GameSpot's Resident Evil 3 review scored it a 6/10 and praised its "focused survival horror elements," though lamented that they were often accented by action-packed set pieces that don't fit tonally with the spookier elements.

For $44.79, you're getting two games at an incredible price. It's one of the best bundles we've seen in a while, and it'll definitely keep you busy if you're stuck inside. Even the non-discounted $80 is a great deal for two games that together cost $100 at full price.