The game made its debut in February on Xbox Live Arcade, PlayStation Network, and PC as a $15 download. It's not clear if Gotham City Impostors for consoles will also adopt a free-to-play business model, and as of press time, Warner Bros. had not responded to GameSpot's request for comment.

For more on Gotham City Impostors, check out GameSpot's review. 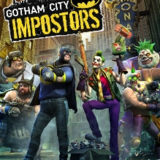