Goodwill Auctions Off Super-Rare Atari Game For Over $10,000

The game was discovered in a box donated to Goodwill North Central Texas.

One person's trash is another person's treasure, and Goodwill North Central Texas certainly demonstrated that when an employee discovered an extremely rare video game in its inventory. The organization managed to sell the game on its website for more than $10,000, with the proceeds going toward free job placement and training for underprivileged individuals.

E-commerce item processor Alex Juarez explained in a video on GoodwillNCT's YouTube channel (via Kotaku) that he and his father had watched videos on expensive old video games, and he immediately recognized the Atari 2600 game Air Raid when he was going through the inventory.

It became the highest-selling single-piece item the organization ever had after it was put online for auction. It ran for a week, and the final price was over $10,500. What's funny is that when Juarez is showing off the box of Atari games he found Air Raid in, you can also see E.T., which was such an infamous failure that Atari ended up burying unsold copies in New Mexico. It would be more than 30 years before those were eventually dug up for the Atari: Game Over documentary.

$10,500 sounds like a whole lot of money, but it's far from the biggest sum ever spent on a single video game. Back in April, a sealed copy of Super Mario Bros. for the NES managed to go for $660,000, becoming the most expensive video game ever by an enormous margin. 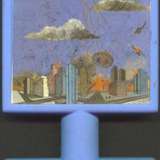