Goldeneye 007 Achievements Leak On Xbox, Suggesting A Remaster Is Coming

This isn't the first time these achievements have leaked, but it's beginning to feel like this remaster is coming sooner than expected.

Oddjob stans, the moment you've been waiting ages for may nearly be upon us. A Goldeneye 007 remaster looks like it may be coming sooner rather than later.

VGC first reported that Wario64, who frequently tweets video game sales and bargains, spotted achievements for Goldeneye 007 on Xbox servers this past Sunday. This neither the first time that a potential Goldeneye remaster's achievements have leaked, nor Wario64's first time leaking its existence. Back in January, they leaked the exact same achievements, which can still be found on TrueAchievements.

Rumors of a Goldeneye 007 remaster have swirled for years, and for a time one was reportedly in the works for Xbox 360, though it never quite came to fruition. Xbox boss Phil Spencer has never confirmed or denied the existence of said XBLA port, but did clarify to a fan at one point that Goldeneye not being on Xbox has "always been a rights issue, not a 'getting code to run' issue."

2022 marks the 60th anniversary of the James Bond series, and it has been previously announced that a slew of news related to the property would be coming this year. While most are banking on an announcement for Daniel Craig's successor in the films, it's beginning to feel like a safe bet to say a Goldeneye remaster is among the announcements. The much-beloved shooter made a mark on the multiplayer shooter scene when it first arrived in 1997 and has been reimagined at least once, for the Nintendo Wii, back in 2010.

Considering the timing of this leak and its proximity to Xbox's showcase as part of the Summer Games Fest on June 12, that Goldeneye 007 remaster may be releasing even sooner than we think, though the game has never been formally announced nor has a release date so don't get your hopes up too much just yet.

Elsewhere in the world of James Bond games, IO Interactive, the developer behind the Hitman games, has been steadily working on its own Bond game, which will feature a "completely original story" for the world's most famous superspy. 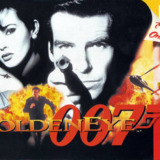