Going under the hood with Ridge Racer 7

Online connectivity, in both multiplayer and single-player, to be focus of new version of Bandai Namco's next-gen racer.

Although no official launch date has been set, odds are that Bandai Namco Game's next Ridge Racer title will be one of the PlayStation 3's launch titles. The game reunites the team of director Masaya Kobayashi and associate producer Hideo Teramoto that gave us Ridge Racers for the PSP and Ridge Racer 6 on the Xbox 360. The September 15 issue of Weekly Famitsu provided a few details on some of the new modes of play that will be found in the Ridge Racer 7.

From the looks of things, many features of Ridge Racer 7 will sport the expected range of play options. Online competitions with up to 14 players will be supported, with the added twist of cooperative modes such as team battles and relay races. Like the Xbox 360 title, RR7 will have a Global Time Attack mode that allows players to post their fastest times to an online scoreboard. This mode will also support split-screen, allowing pairs of players to compete against each other and the clock. A standard single-race arcade mode for up to two players will also be present. Finally, the game will have a separate mode, called UFLA Special Event, for playing downloaded add-ons such as event races.

The meat of the game in the single-player experience will be the sprawling Ridge State Grand Prix. Set in the fictional nation of Ridge State, the player will begin as an unknown racer, but will gradually earn fame, new machines, and customization parts by winning races and building ties with manufacturers. The mode will have 44 courses, including mirror courses, and will span roughly 160 individual races.

According to Famitsu, the network experience will be emphasized throughout the game. For instance, even when playing in single-player mode, ranking stats and news will be automatically downloaded and displayed in the menu screen. The game will also rank players in a number of ways. The Ridge Racer Ranking will provide players with an overall rank based on their performance in the game. A "reputation score" will also be used to rank players based on performance in the Ridge State Grand Prix and online matches. The OBP--Online Battle Point--ranking is based on points that are earned only during online battles. Finally, players are also ranked based on how much cash they've accrued throughout the game. 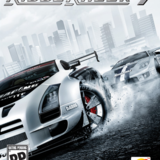