Infamous Japanese cautionary tale of man's quest for power will be Unleashed later this year.

Atari has unveiled plans to resurrect the mother of all monsters for a game coming to the Wii, DS, and PlayStation Portable this fall. Godzilla: Unleashed will put gamers in control of the gigantic green symbol of man's hubris, as well as a host of other famous giants, in a struggle to become crowned King of the Monsters.

The game is described as a "fighting game on a giant scale," and players will be set loose on the world's major cities to tear them apart by clawing, kicking, stomping, blasting, and throwing things. Godzilla: Unleashed will have a nonlinear storyline that will be influenced by the choices the player makes during battles.

This won't be Atari's first rumble with the Godzilla franchise. Previously the publisher released Godzilla: Destroy All Monsters Melee and Godzilla: Save the Earth for consoles and Godzilla: Domination! for the Game Boy Advance. 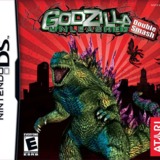