Perpetual Entertainment was one of the first in a lengthy contingent of studios to take it on the chin as part of The Great Recession in 2007. Months before jettisoning the Star Trek Online rights (picked up by Cryptic Studios), Perpetual announced that it had placed its Sony Online Entertainment-published, mythology-themed massively multiplayer online role-playing game Gods & Heroes on indefinite hold--an odd move, considering the game had entered a closed beta-testing phase.

Heatwave also said that it had licensed the rights to PlayGrid's MMORPG publishing platform, as well as the game engines for Perpetual's Gods & Heroes and Star Trek Online. The Austin, Texas-based development house plans to use the technology as part of its "planned roster of MMOs." Founded in 2007, Heatwave has released the soundboard iPhone app iSamJackson and plans to launch Platinum Life: Web Edition for social networking platforms next month.

First announced in 2005, Gods & Heroes is a PC MMORPG set in ancient Rome. The game drops players into the role of a direct descendant of Olympus who is tasked with saving the empire from beasts of legend. Players also have the ability to command their own squadrons while battling mythological monsters.

Heatwave did not indicate when it expects to launch Gods & Heroes. For more on the game, check out GameSpot's previous coverage. 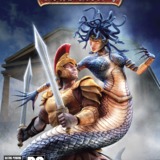