Gamers who have never played a God of War or Infamous title may want to wait until later this month to begin their digital journeys. This morning, Sony announced a new PlayStation Collections software line, which will launch for the PlayStation 3 August 28 with the God of War Saga and the Infamous Collection for $40.

Sony also said that "select titles" from the God of War Saga and Infamous Collection will be available individually--without any of the extra content--through the PlayStation Store. No prices were provided. Additionally, it appears the PlayStation Collections line will grow, as Sony said gamers can expect news in the coming weeks of what other franchises the company will bundle together. 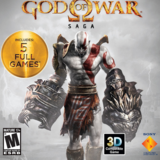