Goat Simulator Transforming Into an MMO

"If anyone from Blizzard Legal is reading this then please don't sue, be cool."

The next update for indie hit Goat Simulator, which its developer describes as the "world's dumbest game," will transform the title into a massively multiplayer online game. Swedish developer Coffee Stain Studios announced the news in a trailer on Monday, which you can watch above.

Update 1.2, which is called Goat MMO Simulator, will be released as a free expansion through Steam this Thursday, November 20. It doesn't sound like the update is also hitting the mobile versions.

"Once you try out our new expansion, you guys will sh*t so many bricks that it'll trigger a new real-estate bubble," Coffee Stain game designer and PR manager Armin Ibrisagic said.

As you can see in the video above, Goat MMO Simulator riffs on Blizzard Entertainment's genre-defining World of Warcraft, even featuring a level cap of 101, one beyond WoW's current max level. The game is a humorous take on the genre, of course, featuring characters including "Dumbledore the Grey" and five different playable classes, one of which is a microwave with legs.

Goat MMO Simulator has "dozens" of quests, but don't expect a lot of content. "Prolly not tons of content tho, but don't hate be cool," Coffee Stain says. There are, however, dinosaurs and mermaids for some reason.

CEO Anton Westbergh added: "If anyone from Blizzard Legal is reading this then please don't sue, be cool."

See more of Goat MMO Simulator in the image gallery below. 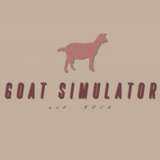