LucasArts' Gladius, a Roman-era tactical-action title, has gone gold. Expected to hit shelves October 28 with an MSRP of $49.95, the game is also available directly from LucasArts, who will include a free packaged action figure with preorders.

A combo RPG and tactical battler, Gladius allows gamers to play one of two characters: Ursula, the daughter of a barbarian king, or Valens, the son of a famed gladiator. Both are new recruits at a gladiator school, and the game follows their sagas both inside and outside the arena as they become famous, earn riches, and prepare for an ominous force's imminent attack. Assisting in their quests for gladiatorial supremacy will be old Roman standbys: the Murmillo, the Samnite, the Centurion, and even a bear. 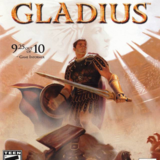