With so many fans (as well as superstitious athletes) concerned about the Madden cover jinx, Electronic Arts may have found a way around the issue by simply picking poster boys for its products that are already experiencing a stretch of bad luck. This weekend EA unveiled the already unfortunate cover athlete for its upcoming NBA Live 08: Gilbert Arenas, all-star guard of the Washington Wizards.

The Wizards are on the brink of being swept by the Cleveland Cavaliers tonight in the first round of the NBA playoffs after an unlucky April sidelined two of the team's top three scorers. The team's all-star forward Caron Butler started the month by breaking a bone in his hand, quickly followed by a season-ending knee injury suffered by Arenas.

"It makes my whole rehabbing that much better now," wrote Arenas in his NBA.com blog. "Because while rehabbing, all I'm thinking about is, 'I'm on the cover of Live.'"

After describing the honor as being "better than a Wheaties box," Arenas tipped fans off to when they could expect to see his mug gracing retail shelves, saying "October 1 or 2. Y'all be at them stores."

EA did not announce a complete list of platforms for NBA Live 08, but it did say the game will arrive on the PlayStation 3 and Wii for the first time. The game is currently in development at EA Canada. 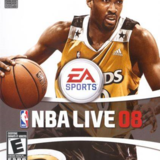