The SSD comes with a heatsink that covers both the top and bottom of the drive, which fits inside the PS5 perfectly.

PC peripheral manufacturer Gigabyte has confirmed that one of its premium NVMe SSDs, the Aorus Gen4 7000s, is compatible with the PlayStation 5. The company shared that its SSD meets all the specifications laid out by Sony in last week's beta firmware update. 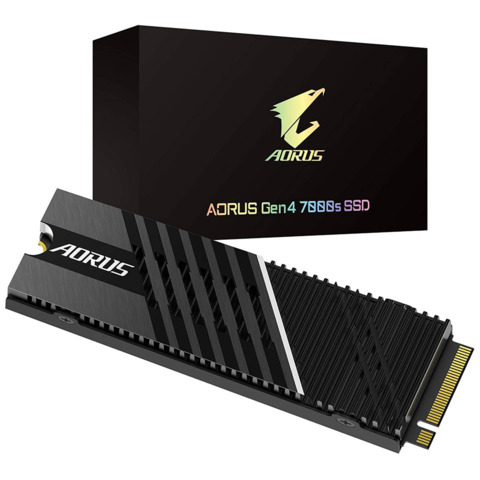 The Aorus comes in two variations, 1TB and 2TB. Both are compatible with the PS5, with Gigabyte confirming that the SSD's included heatsink (that wraps around the top and bottom of the drive) fits within the enclosure on the side of the console. The sequential read speed of the Aorus Gen4 7000s tops out at 7000 MB/s, which is well within the required 5,500 MB/s specified by Sony. This should give the PS5 more than enough headroom to make use of the drive to match the performance of its own internal SSD.

Gigabyte, in its tweet, makes no mention of direct testing with the PS5 to confirm real-world performance, so you should take caution before plunging into a purchase. Sony has explicitly stated that the firmware that allows for internal SSD expansion is still in testing, and that even drives meeting its listed specifications may not work now or in the future. Sony has yet to release an official list of supported SSDs or given any indication on when the firmware will be released to the public.

We've rounded up several options for storage expansion on the PS5--check out our guide to the best SSDs currently meeting Sony’s specifications if you’re eager to pick one up now.