Busting has been known to make people feel good.

At a recent Microsoft press event, we got a chance to check out the Xbox Live (as well as the PlayStation Network and PC) Ghostbusters top-down, twin-stick shooter called Sanctum of Slime. This particular game doesn't really take place anywhere in the proper Ghostbusters storyline (yes, there's a proper Ghostbusters storyline) as the characters and locations have been made specifically for this game. Unfortunately, that means no Spengler, Stantz, Venkman, or Zeddemore, but Sanctum of slime does support cooperative play for up to four characters that are not the Ghostbusters from the movie.

Mechanics in Sanctum of Slime are pretty straightforward. The left analog stick controls movement while the right analog stick determines aiming and shooting--just as you'd find in most other twin-stick shooters. The twist is that, in addition to the position glider, you have two other weapons types at your disposal. Each of these produces a different kind of projectile that you can access by pressing a shoulder button. You'll know when to use a certain weapon type depending on the color of the ghost you're attacking, so if the ghost happens to be red, then you use the regular glider. If the ghost is yellow, then you use a different weapon that produces a yellow netlike projectile that covers a pretty big swath of space. All of the weapons will inflict damage on a ghost no matter the color, but you can kill them (or is it re-kill?) them quicker when using the properly color-coded weapon.

There are 12 levels and two separate boss levels in Sanctum of Slime. Some of the locations you'll see include a hotel, sewer, and graveyard, and most of the locations we've seen so far have enemies that are unique to that area. Level progression involves clearing out a room and then moving onto the next. If team members lose all of their health, you have an opportunity to revive them by standing over the body and pressing the designated button repeatedly. Doing this also means that you leave yourself open to attack, so generally you have to wait for an opening before you risk reviving a fallen comrade. We've only seen one of the separate boss areas, which featured a possessed subway train that popped up from the depths to smash the ground.

While you're fighting off ghosts, you'll also come across cash bonuses, as well as health power-ups. But otherwise, the action is mostly focused on making sure you're using the right projectile. Ghostbusters: Sanctum of Slime is scheduled for release in March. 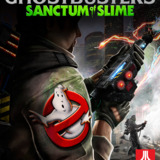