11 Comments
Where to buy
Madden NFL 23
$59.99 at Amazon
$29.97 at Amazon
$69.99 at Gamestop
There are no available deals for this platform
GameSpot may get a commission from retail offers.

We've seen numerous Xbox Series S deals in recent months, but a new promotion that just went live may very well be the best yet. Multiple retailers are offering a free digital game of your choice with the purchase of the Xbox Series S. Here's a list of the retailers offering this deal, but keep in mind the eligible games vary a bit depending on where you shop: 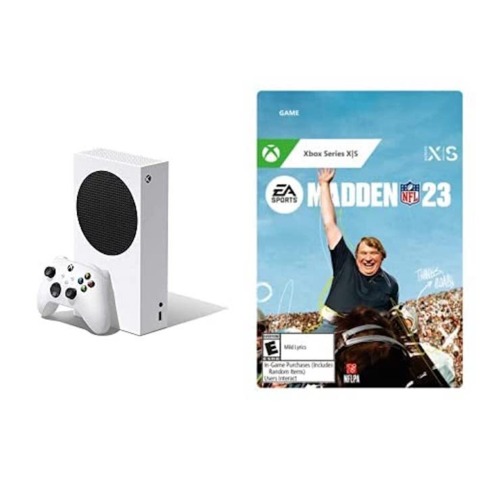 For the best bang for your buck, you can snag the newly released Madden NFL 23 with your Xbox Series S. Madden is up for grabs at all three retailers, though the Microsoft Store has the best deal. Amazon, Best Buy, and GameStop are selling these bundles at $300, but the Microsoft Store has them for $290. Considering that Madden NFL 23 is a $70 game, if you're interested in the new football sim you're essentially paying $220 for the console. That's an incredible deal.

Another notable title that's featured in the promotion is Saints Row, which doesn't release until next week. Lego Star Wars: The Skywalker Saga is a great choice if you want to get a family-friendly game with your Xbox Series S.

The promotion becomes less valuable if you opt for some of the other games that are typically steeply discounted or part of the Xbox Game Pass service. While Forza Horizon 5 and Halo Infinite are two of the best Xbox Series X|S games, they are included in the Game Pass library. Meanwhile, games like Far Cry 6, Red Dead Redemption 2, and WWE 2K22 are almost always available for budget prices.

If you take advantage of this deal, we highly recommend pairing your Xbox Series S with an Xbox Game Pass Ultimate subscription. The Game Pass library includes hundreds of games, including every first-party Microsoft title on day one. Xbox Game Pass Ultimate typically costs $15 per month, but you can get your first month for just $1. If you want to tack on more months to your subscription, you can get a three-month code for $32 (regularly $45) at eBay right now.