We visited THQ's booth at Gen Con and tried out the GameCube version of BattleBots, the upcoming robot arena game for the GameCube and PS2. BattleBots is based on the TV show of the same name--the show itself is about homemade remote-controlled robots that do battle with each other in a small, confined arena. The game will feature two modes of play: an arcade mode and a simulation mode. Arcade mode will be an easy-to-play competitive mode with over-the-top physics and power-up items that players can pick up for their robots just by running over them.

Simulation mode will basically be a career mode that will start players out as a lightweight competitor, then let them work their way up to the heavyweight title and defend it for several rounds afterwards. BattleBots will have 40 original bots from the actual TV show to play with, and about 96 different robot chassis to choose from, classified by their main damage type: players can create robots that ram their opponents and knock them over, or smash them with mounted hammers, and so forth. Players will also be able to design their own BattleBot using various customization options, then save their robot to their memory card and bring the card over to a friend's house to play competitively.

Actual arena fights in BattleBots seem a bit simplistic at this point. Computer-controlled robots seem extremely aggressive, and will generally lock onto your robot immediately. Some of the robot arenas seem to look pretty bare at this point, though the game will eventually have many different arenas, some based on real-world locations like the Golden Gate Bridge in San Francisco, others based on fictitious ones. And just like in the TV show, BattleBots will let you switch the camera to a first-person "robot's eye" view during a battle. BattleBots is currently scheduled for release on the GameCube and PS2 this November. 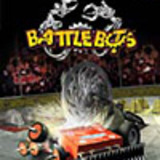