Metro3D announces the North American release of its colorful puzzle game for the Game Boy Advance.

Metro3D has today announced the North American release of Gem Smashers for the Game Boy Advance. The puzzle game, which was developed by Frame Studios Interactive, challenges players to rescue animals captured by the evil scientist Imbu by smashing the different-colored gems that imprison them.

"Gem Smashers is sure to please millions of Nintendo handheld gamers from the novice to enthusiasts that thrive on a more competitive challenge," said Joseph Morici, senior vice president, sales and marketing, Metro3D. "The universal appeal of Gem Smashers as a captivating puzzle game for players of all ages and playing abilities will make this a sure bet for the summer season."

Gem Smashers features three playable characters with differing abilities, 100 story mode levels, and more than 60 arcade levels. In addition to the single-player game, Gem Smashers features a versus battle mode with link-cable support and a further three secret gameplay modes that players will need to unlock. For more information on Gem Smashers, check out our previous coverage of the game. 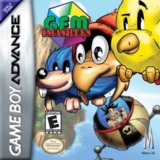