We check out a new build of n-Space's ghostly GameCube adventure-shooter hybrid.

Much like its elusive namesake, n-Space's Geist has been tough to pin down since its development began, but we got an updated look at the unique first-person game recently at a Nintendo press event. Geist puts you in the role of John Raimi, a soldier sent to investigate the strange goings-on at a research facility run by a wealthy madman who heads up the Volks Corporation. Unfortunately, Raimi is captured by those he seeks to expose, and through an experimental process his soul is separated from his body. You'll take control of Raimi's ethereal form, and you'll have to possess everything from dog bowls to mice to other human beings as you attempt to reunite your spirit with your corporeal body and stop the machinations of the Volks Corporation in the process.

The game's quirky, original design elements haven't really changed since our previous looks at it. But since the game is now nearing release, its overarching storyline and other "glue" elements have coalesced, so we were able to check out a demo of the game from the very beginning. Our favorite part of this brief glimpse of the storyline came not long after Raimi was turned into spirit form, when Volks scientists inserted him into a training simulator of sorts that was apparently meant to acquaint him with his new ghostly status. This simulator took the form of a verdant pasture full of rainbows, rabbits, and other sickeningly cute elements. But a computer error soon distorted and ruined the simulation, setting Raimi free in the process.

Another previously unseen element of the game was Gigi, a ghostly little girl who will function much like Navi the fairy from Zelda: Ocarina of Time. Gigi will flit in and out of view at important points in the story to give you advice or direct your actions and will then disappear until the next time she's needed. A Nintendo rep hinted that Gigi will play an important part in the storyline as well as simply helping you along, but exactly what her role in the proceedings will be remained unclear.

Aside from our brief experience with the dramatic aspects of Geist, we got to play around in an early level of the game and make note of some of the basic mechanics. For instance, we observed that while you're in raw spirit form, you'll constantly use up some form of spectral energy that serves as Raimi's life force. If you run out, it's game over, so you'll have to find a way to recharge every so often. The only way we found in the demo level was through common house plants. Why is a spirit able to feed on potted ferns? Who knows, but as we were about to die, we didn't bother to ask. Of course, your energy stops running down as soon as you possess any common object or living host, so you probably won't actually be killed in this manner very often. Nonetheless, we hope this arbitrary time limit doesn't impede your ability to fully explore the environments in the final version of the game.

We also observed that the game will operate with a fairly regimented mission-objective system. In the demo level, we had to possess an enemy soldier to access several different computer terminals and gain information about the fate of one of Raimi's comrades. When you're using an armed human as a host, Geist plays very much like a standard first-person shooter, although we didn't get a chance to actually shoot anyone menacing, since all the other people in the complex were fellow soldiers, and we didn't want to cause any alerts. In fact, some of the soldiers were accompanied by dogs that would become spooked if any possessed humans walked too close, so we had to find another way to get around without raising any alarms (or hackles, for that matter).

It's been a long road for Geist, but the game is almost finished--Nintendo is now stating a June 27 release date for the game. We'll bring you more on Geist, including its previously unseen multiplayer mode, in the weeks running up to that date. 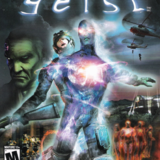