We get an early look at Sierra's upcoming survival horror game based on the hit television series.

Vivendi demonstrated an early PS2 build of its upcoming survival horror game, The X-Files: Resist or Serve, at the ongoing Game Developers Conference. Based on the popular television show, the game includes voice acting from the show's original actors, including David Duchovny as Fox Mulder and Gillian Anderson as Dana Scully. Other primary characters, like the lone gunmen, make appearances in the game and are voiced by the same actors from the show. The X-Files: Resist or Serve features a fixed, third-person camera in the style of Resident Evil, and it makes use of dynamic lighting and shadows to help set the mood.

Three episodes are included in The X-Files: Resist or Serve, and each episode includes two acts--one where the player controls Mulder, a more action-oriented character, and one where players assume the role of Scully, whose missions involve more puzzle elements. The separate acts in each episode chronicle the same story from the differing perspectives of the two FBI agents as they split up and investigate the mysteries from different angles. Over the course of the gameplay, the characters' adventures will briefly intersect from time to time to tie the story together. In the game's first episode, set in Red Falls, Colorado, Mulder and Scully are dispatched to investigate a series of murders that have been tied to ghost sightings in the area. The episode begins with Mulder and Scully driving into the town and running over a zombielike creature, and the episode diverges when Mulder subsequently enters a nearby diner to seek help and Scully explores other areas of the town.

The brief snippet of the Mulder episode we played involved him exploring the diner and coming across zombies that we were able to shoot and search for clues. Exploring the back of the diner, we were able to climb over boxes and push dumpsters out of the way, revealing new areas to explore. Scully's gameplay sequence was a bit more interesting, as it involved her performing an autopsy on mutant humans killed earlier in the game. Through collected clues, she discovers that toxins found in the kidneys of the dead mutants can be extracted and used to kill the other mutants she will come across later in the mission. The gruesome operation requires players to use scalpels, syringes, and other medical instruments to perform the required surgery. Cutting open the wrong areas will release poisonous gases and the deadly "black oil" from the show, which will harm Scully unless players remember to have her don protective gloves and eyewear.

In order to make the game more accessible to fans of the show who may not be experienced game players, the developers of The X-Files: Resist or Serve have included gameplay elements that simplify the exploration of the levels. Items in a scene that players can interact with flash onscreen--these include useable doors and objects that the player can pick up. Players will need to carefully examine some items to progress. For example, a cigar box we picked up in a convenience store held a key that we found only after examining the box.

It's worth noting that the game isn't entirely simplified to appease the general consumer. There are complex elements of the gameplay that will appeal to more experienced game players. Location-based damage is one example of this--as players take hits from enemies, the damage is expressed in different areas of the body, like the arms, legs, torso, and head. Damaged legs can affect movement speed, while hits to the arm will affect the character's ability to aim weapons or raise his or her arms. Players will use med kits to heal themselves, and they can apply the kits selectively to different areas of the body.

Aside from using the show's real actors to do the voices, The X-Files: Resist or Serve includes other extras to appeal to fans of the television series. For instance, the game's intro screen is set up with a DVD-like interface, with looping scenes from the television show in the background and a number of special features included, like behind-the-scenes interviews with the actors. The game is slated a fall release, with both the PS2 and Xbox versions scheduled to ship simultaneously. For more information on The X-Files: Resist or Serve, check out our . 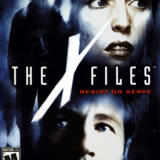 The X-Files: Resist or Serve
Follow
$66.64 on Walmart
Buy