Sixteen classic games packed into one disc: We check out this classic NeoGeo collection.

SAN FRANCISCO--In terms of sheer volume, you'll have a tough time finding more bang for the buck than SNK's upcoming SNK Arcade Classics Vol. 1, a collection of classic NeoGeo games packed onto a single disc. The game is heading to the PlayStation Portable, PlayStation 2, and Nintendo Wii later this year, and today at an SNK press event, we had a chance to try out a handful of games from the collection to see how it's shaping up.

Before we get to impressions, here's the full rundown of the games that will be included in this compilation: Art of Fighting, Baseball Stars 2, Burning Fight, Fatal Fury, King of Fighters '94, King of the Monsters, Last Resort, Magician Lord, Metal Slug, Neo Turf Masters, Samurai Shodown, Sengoku, Shock Troopers, Super Sidekicks 3, Top Hunter, and World Heroes. Being big sports fans, we used our time with the game to check out the various sports games that will be found in the compilation.

Our first stop was the truly fun Baseball Stars 2, which, apart from release on the Nintendo Wii's Virtual Console last year, hasn't yet seen release on a modern console. It's good that Baseball Stars 2 is coming our way because this is a seriously fun baseball game. As you might expect from a 16-year-old game, the controls are very easy to pick up: square button for batting and pitching, X button for stealing bases, and triangle button for bunting. When pitching, you control the path of the ball with the directional pad, which gives you the ability to throw some truly crazy pitches. It'll take some getting used to the somewhat odd camera angles, which can make fly balls into the outfield a bit difficult to handle. There are no handy markers to indicate where the ball will land; instead, you're on your own.

From baseball, we headed over to Super Sidekicks 3, a soccer game that played fast and furious from the opening whistle. SS3 was originally released in 1995 and features 64 teams divided into eight regions. The controls are limited to the three face buttons: triangle for passing/player selection, X for high pass and tackling when on defense, and square for shooting the ball or kicking a low pass. The game sprites looked great, and the game played a viciously fast brand of soccer, complete with fun Japanese touches, such as a player getting fired up (literally) after being aggressively tackled.

Golf was next in the form of Neo Turf Masters, originally released in 1996. There are several golfers to choose from, each with a combination of attributes to take into consideration. Once you've chosen your golfer, you can hit the course. The golf swing is controlled with the square button and is timing-based. There are two meters to pay attention to; the first controls the power of your swing, and the second controls the loft of your shot. The meters move automatically up and down, and you stop the cursor for each meter with the square button. You can also add fade or slice to your shot by holding down the L1 and R1 buttons, respectively. On the greens, you aim your shot with the directional pad, taking into consideration the slope of the green before making your shot.

Moving on from the sports games, our final stop with the SNK compilation was King of the Monsters, a wrestling/fighting game hybrid starring huge monsters fighting it out in urban environments. The stage we played was a 2D version of Tokyo in which our monstrous combatants battled it out. The city itself is full of destructible buildings and other elements (at one point, we tossed our opponent onto a speeding train, destroying the train in the process). You can also use electrical lines as a weapon to temporarily electrocute your opponent. This is a wrestling game at heart, and so the idea is to pin your opponent after wearing him down with tosses, kicks, and punches. Only a handful of monster fighters were available at start; notable inclusions were a beetlelike creature and a gigantic human that looked a little like a Godzilla-sized version of Captain America.

The four games we played only scratched the surface of what is available in SNK Arcade Classics, which will also include classic fighting games such as the original Samurai Shodown and King of Fighters '94, as well as lesser-known games such as Magician Lord and Shock Troopers. The collection is due for release on the PSP and PS2 in the second quarter of 2008, with a Wii version due at the end of the year. 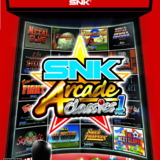