We head to the show floor at GDC 07 to get our hands on a multiplayer demo of The Legend of Zelda: Phantom Hourglass.

One of the most popular games in Nintendo's booth at the 2007 Game Developers Conference is unsurprisingly a Zelda title. The Legend of Zelda: Phantom Hourglass is the first game in Nintendo's flagship franchise to appear on the Nintendo DS, and it was on the show floor in playable form. Nintendo is keeping the single-player game under wraps at the moment, but it did lift the veil on the multiplayer component of Phantom Hourglass, and we played a few two-player matches.

The multiplayer game that was on display at the show involved Link running around a large maze collecting fragments of the Triforce called "force gems." One player is blue Link, and the other player is red Link. The game is played in three, two-minute rounds. During each round, one player controls Link by moving the stylus around the screen. This player can tap the force gems onscreen to pick them up. The object of the game is to deliver force gems to your color-coded base zone located on one end of the maze. The player with the most force gems at the end of the match is the winner. But it's not as easy as grabbing gems and dropping them off at your base because while you're gathering gems and running about, your opponent is doing everything possible to get in your way.

The player who isn't controlling Link takes control of three enemy guards. This player can point to one of the enemy characters and draw lines on a map of the maze that appears on the lower screen. The guards will follow these lines, and if they get close to Link, they'll chop him with their swords. If Link gets hit, the players switch sides and the one who was controlling Link then controls the guards while the other player grabs force gems.

But there's more to account for than gems and guards. The maze is designed so that there are several light blue zones, which are safe zones. Link can enter these zones without fear of being attacked by the guards. Two of these zones are located at the top and bottom of the maze, and there's an underground passage that allows Link to quickly go from the bottom of the maze to the top. The guards can't use the passage, so if you're clever and quick enough, you can try to fake out your opponent using the safe zones on the map.

There are also power-ups scattered throughout the map. Each power-up is color coded to designate which of the two players can use it. Some of the power-ups Link can get include a shield that allows him to take an extra hit from a guard and a power-up that increases Link's running speed. The speed boost is especially good because when Link is carrying a force gem, he can't move very quickly. There are larger force gems that are worth more points, but they slow you down to a crawl and leave you vulnerable to attack. The power-ups for the guards are slightly different, but they're just as useful as the power-ups for Link. If you're playing as the guards, you can pick up speed boosts, items that increase your range of attack. You can also activate wind jets that block certain pathways.

Phantom Hourglass looks good on the bright screen of the DS Lite. The character designs are reminiscent of The Legend of Zelda: The Wind Waker, which is a good fit for the game. The level we saw was colorful and very green as you might expect from a Zelda game, but we spent most of our time looking at the overhead map screen rather than the action screen. When you're playing as Link, the action appears on the bottom screen of the DS, and when you're playing as the guards, the action appears on top with the map on the bottom. The action is zoomed in tight on Link, which looks good and makes it easy to control him, but it also means you'll often get surprised by enemies lurking around blind corners.

The multiplayer in The Legend of Zelda: Phantom Hourglass is local only at this point, with no announced plans for online play. There's a possibility of more multiplayer modes beyond the maze game, but Nintendo is keeping quiet about details at this point. On top of all that, there is still no announced release date for the game. As soon as we learn more, we'll be sure to let you know. So check back here often for more on The Legend of Zelda: Phantom Hourglass. 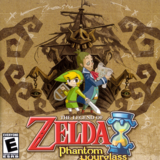