We get a taste of the darker side of Mistwalker with a demo of its upcoming action role-playing game, Lost Odyssey.

Hironobu Sakaguchi was in San Francisco to show off a couple of new role-playing games for the 2007 Game Developers Conference. Of course, coming from Sakaguchi, it's difficult not to draw comparisons between his latest game and the gold standard for role-playing games (which he helped create), Final Fantasy. Of the two games he was in town to present, the one that had the closest look and feel to a Final Fantasy game was Lost Odyssey. We sat in on a demonstration of the game, and although little was revealed in the way of details about the story or gameplay, we did come away with a better idea of what to expect from Lost Odyssey.

It's an action role-playing game set in a world that is equal parts fantasy and science fiction. The game stars five immortal heroes who have lived for 1,000 years. Apparently, 30 years ago, a strange new power brought "magic energy" to the world. This energy was integrated into everything from technology to warfare, but of course, the power comes with some serious consequences.

We unfortunately didn't learn anything more about the story, but we did get a good idea about the overall style and tone of the game. We watched a lengthy intro movie accompanied by some pretty opera music that gave us an extended fly-through of a huge, sprawling city. The city was packed full of ramshackle structures that seemed to indicate a life of poverty for many of the city's inhabitants. In the middle of the city was a huge monolithic structure that appeared to be a military installment of some sort. All of the buildings were grimy and dirty, seemingly to give the appearance of an early, industrialized civilization.

Later, we watched a cutscene complete with English voice-overs. In the scene, a man and a woman were standing in a secluded alleyway having a discussion. They were apparently off on a mission of some sort but were waiting for another person to show up. Soon, a very drunk man appeared from a door nearby, accompanied by three blond and scantily clad women. The man joked around about being needed for an important mission and eventually after some coercion was convinced to take leave of his female companions. The whole scene was quite funny, and the English voice acting sounded good. Apparently, although the game has a gloomy, somber look, it will have its share of humor as well.

The final scene we saw was of a submarine entering an underwater structure. Apparently, there are several sequences in the game where you'll control a submarine and cruise the depths of the ocean. You'll have complete control of the vessel, but what you'll actually do with it remains to be seen. The video we watched was a short render of a sub spiraling up an iridescent column that looked like something from a science-fiction movie.

One of the more concrete details revealed during the demonstration is that Lost Odyssey is planned for a simultaneous release in Japan and North America before the end of this year. It was also suggested that the game would launch in Europe at the same time, although that seemed to be a bit more up in the air at this point. Regardless, it should be interesting to see not one, but two, Mistwalker RPGs released this year on the Xbox 360. We'll keep you posted as more information becomes available about Lost Odyssey, so be sure to check back here often. While you wait, you'll also want to take a look at our recent impressions of Mistwalker's other highly anticipated RPG, Blue Dragon. 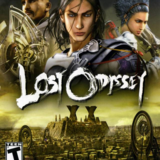