We flex our mental muscle with a hands-on demonstration of Big Brain Academy on the Wii.

If you think the motion-centric design philosophy of the Wii is only good for physically-involving games, you might want to take a look at Big Brain Academy, a game that demands split-second mental calculations rather than a bunch of goofy gestures. We visited the Nintendo booth at the 2007 Game Developers Conference for a hands-on demonstration of several of the minigames in Big Brain Academy.

We played the versus mode in Big Brain Academy, which supports up to eight players in two teams of four. Each player can choose a Mii, and during the game the players on each team take turns, handing off the Wii Remote. The versus mode is a series of minigames that you have to complete as quickly as possible. The screen is split down the middle, with one team on the left and the other on the right. Puzzles appear onscreen, and after you solve each one you move on to another. A vertical line in the center of the screen shows a Mii moving up toward the top of the screen as you complete puzzles. The team that reaches the top of the screen first is the winner. Based on the games we played, it doesn't look as though the two teams encounter the same minigames in the same order, so you can't simply look at what your opponent is doing to get an idea of what you're supposed to do.

There are several ways to set up the multiplayer game in Big Brain Academy. You can choose from 12-, 18-, 24-, or 30-game matches, three difficulty levels, and five different game types--think, identify, memorize, compute, and analyze--which determine what kind of puzzles you'll see. There's also an option to mix the categories randomly to get minigames from each one.

The game controls quite well with the Wii Remote. You simply point at the screen and use the A button to interact with objects or make selections. We saw about a dozen different minigames, but there are supposedly around 30 already in the game, with possibly more to come before the release.

We played one game where we had to pop numbered balloons in order from lowest to highest, which wasn't easy, as the balloons were floating all around and upside down. In another game we had to memorize where three birds were in a field of six cages before the cages were covered and shuffled around for us to find the birds. There were some simple identification puzzles that showed four pictures and asked a question. For example, we were given a picture of a fish, a snake, a flower, and a squid and then asked to choose which one has legs. Some games tried to trick us with the wording of the questions, like one that showed a car, a turtle, a bird, and a rocket and then asked which one was fourth slowest. There are also several "spot the different image" puzzles in the game.

Other games involve spatial logic, like one that has a series of blocks on the bottom of the screen and a large, uniform shape on the top. You have to break the blocks on the bottom until they collectively form the same shape that appears on the top. There's also a game that shows a rotating, 3D object and has you pick that same object from a selection of four items. One game we played had two kids falling down the screen very quickly, and it asked us to pick the correct picture of one of the kids from a selection of similar-looking faces. In a whack-a-mole-style game, you're told to hit three different shapes. Several shapes pop up out of six holes, and you have to hit the correct ones. If you hit a wrong shape, you have to start over.

At the end of the game you're shown your percentage of correct answers and the time you took to complete the entire series of puzzles. You aren't given any sort of rating of how smart you are, because in versus mode all that matters is whether you're smarter than your opponent.

We got a good feel for how Big Brain Academy works in a few rounds of versus mode against one of the Nintendo representatives. It seems like a fast-paced, fun game that will appeal to just about everyone. As far as the game's offering any depth, we won't know until we get a look at some of its other play modes. You still have time to study up, though, because there's no announced release date for the game at this time. We'll bring you more details on Big Brain Academy for the Wii as soon as they become available. 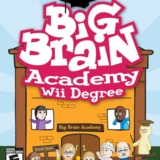