Two new events have been added to the mascot Olympics, and we've got the full rundown on both.

LEIPZIG, Germany--Who would win in a foot race between Sonic the Hedgehog and Mario? How about a triple-jump competition between Peach and Tails, or a hammer-throw contest between Bowser and Dr. Eggman? Crucial questions such as these will soon be answered with the upcoming release of Sega's Mario & Sonic at the Olympic Games, an updated build of which we saw--and played--today behind closed doors at the 2007 Games Convention.

In addition to the three events shown in the E3 version of the game--the 100m dash, the hammer throw, and the triple jump--we also got to check out two newly announced Olympic events in the game: archery and the 110m hurdles. As with the other events in the game, these two make liberal use of the Wii Remote and Nunchuk attachment, though in significantly different ways. The 110m hurdle, the only event we got to try out for ourselves, plays a lot like the 100m dash. Before the race begins, you can charge up your start to get a quick dash off the line by pressing the B button. Once the starting gun is fired, you let go of the B button and begin furiously drumming the Wii Remote and Nunchuk to get those feet moving. As you run, you press the B button to leap over the hurdles in your way; should you mistime your jump, your character will slow down and you'll likely be left behind in the dust.

Though we didn't get to try it out, the archery minigame seems like a nice change of pace from the hectic dash events. Here, you draw your arrow in much the same way as you might do with a real bow: by holding your Nunchuk straight out in front of you, then pressing the A and B buttons together to simulate pinching the arrow on the string, after which you pull back with your Wii Remote. Aiming is handled with the Nunchuk, and the goal is to line up your targeting reticle with a moving target on an overlaid target graphic. Obviously the goal is to shoot the arrow as close to the center of the target as possible, but a 30-second time limit per shot will prevent you from taking all day to line up your shot. Each shot you take is assigned a score depending on accuracy, and the player with the most points wins. To add complexity to the archery competition, the wind kicks up after the first round, and so you'll need to compensate your aim for the direction and power of the wind (which you can see by a handy arrow and airspeed indicator in the top right portion of the screen).

Different events in Mario & Sonic will play to the different characters' strengths--some characters might have a high precision rating, making them ideal for the archery challenges, while others might be more adept at strength challenges, such as the hammer throw. In the end, your success on the field will be a combined result of which characters you choose to enter in a competition, and how skillful you are with the controls.

Thanks to the wonders of Olympic licensing, we still don't have a full picture of all the events that will make up Mario & Sonic, but you can expect to see more announcements on event types, as well as more characters added to the game's roster, in the coming months. What we do know is that all the events will be playable by up to four players on the same console, which is good news for those who want to settle those "Who's Better: Mario or Sonic" arguments once and for all. The game is due for release this November and we'll be following its progress 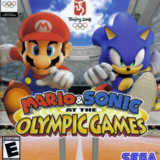