With the game due in stores in November, the Leipzig build of Jackass: The Game was in final form. We signed up with Knoxville and the gang for a full hands-on playtest.

LEIPZIG, Germany--It's unlikely that there'll be another TV show or movie based around Jackass, but the series lives on thanks to a new PlayStation 2 and PlayStation Portable video game. Developed by the New Zealand outfit Red Mile Entertainment, the game features 35 minigames based around various Jackass stunts, all of which star the voices and likenesses of the ragtag bunch themselves. We sat down with the PSP version at this year's Leipzig Games Convention to find out if this tie-in can retain the indie cool of the original series.

The single-player game breaks its stunts down into a series of episodes, all of which are presented in the same manner as the TV show. This will take the form of the MTV Story Mode, with seven episodes and 35 stunts in total. The majority of stunts are based on famous video games including Road Rash, Duck Hunt, and even Katamari Damacy. Each stunt has five separate objectives. Complete three of them and you'll progress to the next level; complete all five and you'll open up bonus content. You can usually complete two or three in a single go, but opening up the rest will take at least a couple more tries.

The first game we saw involved rolling Steve-O in a trash can down a San Francisco street. The idea is to perform stunts while missing the oncoming traffic, the success of which is shown by cuts and scratches to Steve-O's face in the bottom corner of the screen. As if that wasn't enough, there's a time limit to contend with as well, meaning that you have to keep up the pace while pulling off tricks and avoiding injury. Failure is as much a part of the game as it is the series though, so you can choose to perform a spectacular bail at any time to lose the challenge but hopefully still win some points.

Our preview session also revealed a few more of the stunts from the finished game. Jackass wouldn't be Jackass without someone eating raw eggs and throwing up into a bucket, so this game is included for the sake of completeness. There's also a game where Steve-O is rolled down a snow-capped mountain to become a giant human snowball, and one where you fire paintballs at a topless Knoxville on a spinning wheel. Our favourite, though, was a game of trolley dash where you race the guys down a San Francisco hill, smacking them in the face along the way.

The creators of the series were apparently reluctant to get involved with the game, but as it progressed they gave more and more direction to the team in order to stay true to the license. For example, Steve-O indicated a couple of changes to his character's tattoos, and was also involved in picking bands as The Datsuns for the soundtrack. All the main cast apart from Bam Margera have contributed voices to the game, too, so the intros and outros feel genuinely authentic throughout. The motion-capture work has been handled by Oscar winners and fellow New Zealand outfit WETA Digital.

The PlayStation Portable version will differ slightly from the PlayStation 2. First of all, there'll be a director mode that will allow players to create their own machinima-style animations. The characters in the game can be manipulated both physically and vocally, allowing you set up a variety of different situations to commit to virtual film. You can then save these files to a memory card, transfer them to a PC, and theoretically upload them to the Net from there. The team also hopes to provide post-release downloadable content for the PSP version of the game.

While we only got to preview the PSP version of Jackass: The Game, both versions will be hitting store shelves in November. From what we've seen, the game looks to have accurately retained the feel of the show while adding some clever gameplay elements that should be familiar to seasoned gamers. We'll see how well Knoxville and the gang hold up in our full review later in the year. 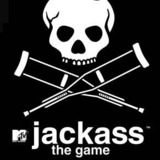