Developer of Age of Empires series thinks striking a balance between appealing to hardcore and casual gamers was key to success, hinted at space-based installment for franchise.

LEIPZIG, Germany--Making a game which appealed to both the casual and hardcore gamer was what made Age of Empires and the title's follow-ups so successful, according to a Games Convention Developers Conference retrospective on the game.

The panel, made up of Ensemble's Bruce Shelley and Tony Goodman and Iron Lore Entertainment's Brian Sullivan, said that all the decisions they made when designing the game were made with the intention of keeping both groups happy.

Ensemble's Bruce Shelley said that the casual audience was important because, "If you're too focussed on making a hardcore game, you run the risk of dropping off a lot of sales... It shouldn't be too hard to play."

The first Age of Empires game was launched in 1997 on the PC, and numerous sequels and spin-offs followed. Despite now being 10 years old, the panel told the audience that the Age series still has legs left. Tony Goodman said, "We still have more ideas for Age of Empires. The reason we're not working on Age of Empires at the same time as Halo Wars is because we don't want to blend these ideas, and we only have so much creative bandwidth to work on."

The panel laughed as they remembered that at the time fantasy and science-fiction games were all the rage, and no one thought a historical strategy game would work. Looking at the games that were currently on the market, they deliberately decided to make their game different in several ways. Tony Goodman gave as an example, "All of us in the company, we're big fans of bright colours. Games at the time were quite dystopian... I was just wondering why there were no games of places you'd want to be--they all seemed to places you wanted to escape from."

As with any huge project, there were a whole host of features that were meant to be in the game but never made the final cut. Brian Sullivan said, "We had put together a list of all the little features we wanted in Age of Empires one. It was five pages long, and I think we managed to put in half a page's worth."

Bruce Shelley told the audience that the team loved history and had shelves of history books stacked up in their offices. However, "The games aren't so much about history but about the human experience, which is not just what we've done and what we are doing, but what we might do."

He hinted as to which direction future iterations of the game are headed, saying, "So, I think there's a lot of room left for Age games yet. Like going into space. Humans are expected at some point to go into space, so there's possibilities there." 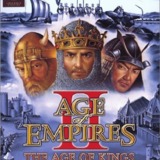