There are precious few local-only party games for the PC, and there is an important reason why. Party games are well suited on the console, which can be placed in a living room without requiring any extra effort. Computers are the home of online multiplayer, and enjoy a different seat in the house. Yet Gang Beasts is defiantly a party game, and a good one at that. The effort to push aside a console for a hulking computer tower is actually worth it, due to Gang Beasts' fun and amusing combat, featuring arenas brimming with deadly snares. If you can get past the unstable camera and bland graphics, Game Beasts delivers punchy bouts of entertainment and laughter, though the scarcity of game modes makes each play session a short one.

Gang Beasts' single mode is called Survival. In Survival, the last gelatinous fighter not pummeled, squished, or immolated is declared the winner. You fight across eight small, but highly varied, maps filled with deadly devices and pitfalls. One map has you fighting in a factory covered in industrial shredders, while in another, you and your fellow combatants duke it out on a rickety gondola hundreds of feet in the air. Another map challenges you to duke it out atop two speeding big rigs while dodging oncoming traffic signs. The goal is to either wallop opponents off an edge, or to knock them out by dwindling the health bars floating above their heads to zero. After they go limp, you drag them or pick them up and hurl them off a cliff or into one of the many gruesome traps.

Despite how the cartoonish Gang Beasts appears at a glance, this is not a game for kids. You immediately notice a stark juxtaposition occurring onscreen. The fighters are adorable, complete with large, white eyes, and painted in a solid color such as red, purple, or green. Some of them sport a hat, such as a fez or a sombrero, while others are dressed in cute, full-body outfits (kigurumis) resembling animals like bears and lizards. But to watch one fighter fling another into a buzzing fan blade, or another tossing a combatant dressed as a fox into the path of a speeding subway train, is enough to leave your jaw hanging open before laughing at the absurdity. It's as if a fight suddenly broke out in Teletubbyland, and Tinky Winky just threw Dipsy into a burning pit of fire. There is no gore or blood, but it takes a moment to register the unforeseen violence.

The brightly-hued fighters have a lazy quality to their actions. They can only jump so high, but the way they slowly fall back to the ground is like watching an old balloon lose its power over gravity after helium has leaked out of it. Movement and attacking also have a feeling of airy frailty. It's amusing to watch the tiny fighters hop and skid around an area, while throwing punches with the muscle strength of a toddler. There is no fall damage, which makes jumping off tall ledges to belly flop on the ground below a constant source of amusement.

Attacking consists of flinging punches at your closest foe. You can strike with the left or right arm, and holding one of the attack buttons down allows you to grab and hold. Many fights involve you gripping an opponent with one arm while thrashing him with the other. When two fighters have the same idea, what usually follows is a comical spinning dance, with both fighters lashing at each other with their free arms. Taking down your opponent's health bar causes him to go limp and fall into unconsciousness; then you may hold both attacks to grab him, while a third button allows you to lift him up in the air so you can toss him over an edge or into a killing snare. Unconsciousness only lasts a short while, so you have but a brief opportunity to take someone out before he starts flailing out of your grip.

The goal is to either wallop opponents off an edge, or to knock them out by dwindling the health bars floating above their heads to zero.

The wonky physics powering Gang Beasts give every fight a semblance of unpredictability, but it's actually the game's best feature. Punch strength is difficult to control, so taking a right hook could cause little damage or knock you out cold--and it's a part of what makes Gang Beasts such a joy to play. I could never recreate a flying knockout punch I landed on my friend during a one-on-one battle, but when I did it the first time--sending him into a coma--it was met by laughter and cheers. In several matches, I watched as two colorful fighters waling on each other got interrupted by another who entered the fracas, fists flying, only for all three to knock each other out at the same time, causing them to flop pathetically to the ground. I'm normally competitive in any sort of multiplayer faceoff, but I found I couldn't get angry with a game like Gang Beasts. I was swept up by its charm and was unfazed by any losses, probably because I was laughing too hard to care. The only thing I would ask is for a way for the game to keep score of who has the most wins in a given session.

Unfortunately there is an unfinished quality about Gang Beasts. The game lacks settings for graphics or controllers, and it is completely without a keybinding menu, so figuring out what key or button does what is a matter of trial and error as you play matches. Another odd choice is that the music is turned off by default. I strongly suggest that you turn the music on the moment you load the game as the soundtrack is actually rather catchy, and nicely complements each level's particular theme. Aesthetics are clean and smooth, though the solid textures lack in color variety, making some of the levels look drab and boring. The textures also aren't seamless, and you can spot cracks forming as you move around an arena. The game is not free of glitches, either. At times, your hand will get stuck in a piece of geometry, and freeing yourself usually requires being pulled out by a friend. (Well, a temporary friend.)

The camera is buggy, and often has problems trying to contain every character onscreen. Sometimes it focuses on a couple of characters, while cutting others off completely. Other times, the camera zooms out too far, and you have to squint to see the action. The camera is most problematic in levels such as the subway or the vents, in which the camera zooms out so far, the arena becomes a small, bright rectangle in a sea of black.

However, a night of Gang Beasts was enough to convince me that the game doesn't need to rely on having an online mode to be great. Gang Beasts is a party game; it needs a party to be truly appreciated, with friends in which to create and share memories. Mixing random anonymous players and the possibility of little to no voice chat would sap the enjoyment. Gang Beasts has a spark of life, and a potential to be a party game in which to keep returning. If anything, I'd like to see the camera get tweaked, glitches cleaned up, and far more gameplay modes than just one.

Myself and my three friends, who spent a night playing Gang Beasts (I bribed them with free pizza), talked and laughed about the game for some time afterwards, recalling hilarious moments that occurred over the several hours. As the party members began to call it for the night, these guys who rarely play games that are not triple-A quality, could only offer Gang Beasts the best kind of compliment:

"Hey, we should do this again sometime." 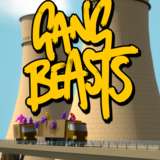