We talk to the game designer and founder of Digital Anvil about the company's recent announcement that it's being acquired by Microsoft.

In a surprising press release issued yesterday, Microsoft announced that it has acquired Digital Anvil and the rights to Freelancer and an unnamed Xbox game. Even more surprising was the news that Digital Anvil's famed designer and CEO Chris Roberts will leave the company once the acquisition is completed in order to pursue other interests. We spoke with Roberts about this announcement briefly yesterday, but this morning we took the time to sit down with him and talk about these recent developments in length.

GameSpot: Chris, how long ago did you start talking with Microsoft about the acquisition? Who initiated these talks?

Chris Roberts: Microsoft started the talks about six months ago.

GS: In a time when a developer's freedom is fast becoming scarce, why would you choose to make Digital Anvil a division of the world's largest software company?

CR: It's very difficult to build wildly ambitious games without the financial security of a larger company, especially when their development cycles are so unpredictable. Freelancer was meant to take three years - it will probably be four and a half years by the time it is done. It's very tough for an independent developer to weather that kind of slip, and it's not just Digital Anvil. I believe all A+ games require severe patience and funds - witness Team Fortress 2 and Black & White.

GS: Does that mean that Digital Anvil was ever at the risk of running out of money? Was this acquisition necessitated by a need for funding?

CR: Partly. Whenever something runs later, it needs more funding. Becoming part of Microsoft made this issue less of a problem.

GS: And how will this acquisition benefit the development of the Digital Anvil games?

CR: Security in being part of an ambitious publisher. In-house games always are the favored children [of publishers]. Believe me, I know - this was totally the case with Electronic Arts when I was there on the other side of the fence.

GS: Conversely, how could this acquisition possibly hurt their development?

CR: It gives Digital Anvil less independence. [The games become] more susceptible to the political whims or needs of a big organization (the same issue was at EA) or sacrificing for the greater good of the organization, like making Christmas no matter what cost because the games group really needs a hit.

GS: When Microsoft acquired Bungie, the entire company was relocated to Redmond, Wash. Does this mean that Digital Anvil employees will have to move from Austin, Texas, to Washington?

CR: No. Digital Anvil will continue to operate in Austin, from the current offices.

GS: What's the mood like in the office? Does the team view this acquisition as a good move?

CR: Generally, most people are positive. The extra security of being part of a big organization is good.

GS: As part of the acquisition agreement, Microsoft only picked up Freelancer and an unannounced Xbox game. Where does that leave Loose Cannon?

GS: Why didn't Microsoft choose to publish Conquest: Frontier Wars? After all, the game is finished, right?

CR: Microsoft's publishing model is very different to most other publishers' - if they don't believe they can sell more that 500,000 units, they are not interested in selling it (with their overhead it means they will probably lose money just releasing it). Conquest was on this cusp. This is not true for other, smaller publishers. I believe very strongly in Conquest, it's fun and it looks fantastic. We will shortly be posting a Web demo, and we're currently talking to publishers. I'm pretty positive it will find a home before the year is out and you will see it on shelves next spring. At that point, everyone can judge for themselves.

GS: Have other publishers expressed interest in picking up Conquest: Frontier Wars?

CR: Absolutely. Everyone who has seen it to date has expressed strong interest. In fact, most people can't believe Microsoft didn't want to publish it.

GS: Is Tony Zurovec going to found his own game company?

CR: Hopefully he will finish Loose Cannon. After that, who knows?

GS: Is Erin Roberts staying at Digital Anvil? What's he been working on since StarLancer?

CR: Erin is staying. He is producing our unannounced Xbox title.

GS: What's going to happen to the other team members who were previously working on Conquest and Loose Cannon?

CR: Some will move over to Freelancer and the Xbox title. Some will leave Digital Anvil to continue working on Loose Cannon and ensuring Conquest meets another publisher's requirements.

GS: Let's go back to Freelancer. What will your role in the project be following the completion of the acquisition?

CR: I'm now the creative consultant. I'll be polishing off the script, giving ongoing creative guidance to Phil Wattenburger (my co-director on the project), and helping with all the press stuff.

GS: Are you pretty confident that Microsoft won't change the game? To make it more marketable, for example?

CR: Hey, it's fully mouse-driven. It's already marketable! I wouldn't have done the acquisition if I thought that Microsoft would compromise Phil's and my vision for the titles.

GS: Do you think Microsoft will port Freelancer onto the Xbox? Do you think it could be a good Xbox game, despite its mouse-driven interface?

CR: This is really a Microsoft question, but my guess is no for Freelancer. Freelancer 2 is another question.

GS: We know that you can't divulge too much information on Digital Anvil's unannounced Xbox game, which was picked up by Microsoft, but can you give us any hints as to what kind of game it will be? What genre does it fall under?

CR: Ed Fries would hunt me down and kill me. But it has been in development for two years and it is sci-fi...

GS: You've previously told us that you'd like to do more work in film or explore ways to exploit broadband technology. Can you elaborate?

CR: I'll be ready to tell you more later.

GS: Looking back, do you wish you could revisit the Wing Commander universe, or do you feel you've taken that series as far as it can go?

CR: I still love Wing Commander. Given the right opportunity, I would definitely revisit it.

GS: Does your departure from Digital Anvil mean that you'll be leaving gaming altogether?

CR: No. I love interactive gaming. I just need some time to recharge my batteries, because working on four-year projects is very draining. 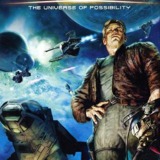