It's time to throw your wallet into the garbage disposal as we run down the best, weirdest, and free-est F2P games from Gamescom 2012.

In case you hadn't noticed, free-to-play games are a pretty big deal these days. And at a PC-focused show like Gamescom, they're an especially big deal. Luckily for you, we've spent countless hours looking through the weirdest, craziest, and scariest games on display here at Gamescom to bring you the Gamescom Free-to-Play Award Showcase Spectacular!

From Gaijin Entertainment comes this WWII-based vehicular combat game where one half is a player-versus-player massively multiplayer online game that has players filling the sky with dueling airplanes (and ground vehicles to follow in a later update) while the other half is a campaign that lets you reenact battles such as Peleliu, Guadalcanal, and more. Learn the ropes of aerial combat while taking part in some of history's most memorable conflicts, and then start blasting rival planes from the sky when not decorating your plane with era-specific pinup girl decals.

Most Terrifying Depiction of American Crime From a Korean Developer

District 187 is a scary vision of urban crime in America. In this first-person shooter, crime is so prevalent that street gangs and police SWAT teams are locked in a perpetual turf war, stealing money away from each other in game modes like Bank Heist and outfitting their weaponry with increasingly deadly attachments as they work up through a COD-like leveling system. Clearly, no citizen is safe. But it's probably their own fault for moving to a place called District 187 to begin with.

Also from Gaijin Entertainment is this space combat MMO game about a future where man has discovered the treasures of an ancient civilization in a distant galaxy. And subsequently, as humankind so often does, we all just end up fighting over it. In this case, though, that fighting is done using powerful spaceships that you can upgrade through absurdly detailed tech trees. So, on second thought, maybe we should find ancient treasure on mars. 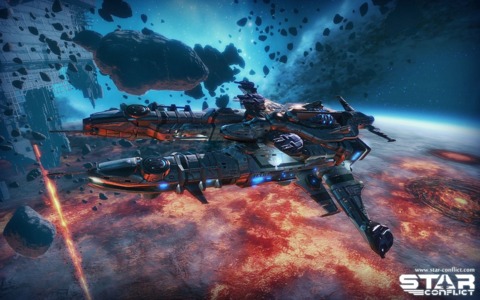 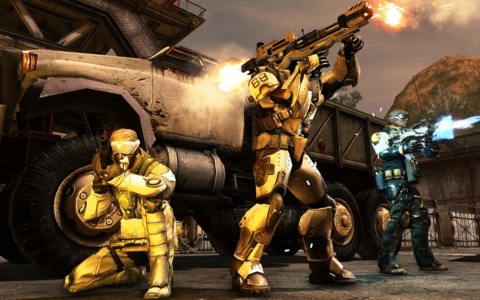 Trion Worlds and Syfy have pooled their resources to create a postapocalyptic world that spans both television and video game. The aim for this union is to have both sides influence each other in interesting ways. For example, a character in the game may steal an important item from the player only to have that item pop up again in the show. Or a character in the show may digitize themselves into the game, where they are then spawn camped, and the whole operation is brought to a screeching halt.

In the near future of the Bullet Run universe, a revolutionary new "Synth" technology lets people reincarnate themselves into new bodies upon death. This groundbreaking, scientific achievement--which skirts the edges of divinity--is put to use fueling the latest reality-TV craze: Bullet Run. Just imagine Big Brother, but with a lot more guns and a lot less…everything else. Here, the goal is not only to win, but to hype up the crowd with fancy kills and strategically deployed taunts. Plus, you can play right now.

Ubisoft's stable of free-to-play, browser-based games includes the hardcore submarine sim Silent Hunter Online. Life on a submarine is anything but riveting, and to Silent Hunter's credit, it manages to reflect that sentiment quite well. Of course, once a dozen or so friends join in, one-on-one naval battles quickly scale to epic, explosive exchanges of torpedoes. As the captain of your vessel, you must manage your crew efficiently and pay close attention to the numerous gauges and displays surrounding the periscope. Should you fail in your mission, you may find yourself in a steel casket on the bottom of the ocean before you know it.

Ubisoft's city-building sim gets its first multiplayer release in the form of a browser-based, Flash 11 game, but there is little sacrificed in the way of scale, or detail, in the transition. Friends can work together to create gigantic empires that are indistinguishable from those found in the retail releases, and if you wish to speed things up, a tiny donation to Ubisoft will help speed things up. With the help of hundreds, if not thousands, of other players, your civilization has the potential to grow to a massive scale through cooperative efforts and trade, rivaling the enormity of empires found in other games in the Anno series, if not the entire world-building genre.

Although Wuxia films were arguably more popular 10 years ago than they are today, in the West at least, that hasn't stopped gPotato bringing Age of Wulin (known as Age of Wushu in North America) over from China. The game features pretty cool movie-like wirework effects, such as floating through the air, running across water, and, of course, kung fu. There are eight different schools of the martial art to learn from, as well as 17 professions, including chef. The only downside could be that the game wants to take over your life: your player becomes a non-player character when you leave--go away for too long and you could end up getting kidnapped or robbed.

Project Theralon is a sandbox MMO game from Berlin-based Infernum Productions, and one of the hooks is that you can create entire cities from the ground up using a modular building system. From there, it's up to you how those cities are run, so player and faction politics are critically important in determining your experience with the game. It's kind of like a cartoony fantasy version of EVE, only you get to also ride around on dragons.

Best Diablo Clone That Has Wolverine in It

It should come as no surprise that Marvel Heroes looks and feels so much like Diablo--creator David Brevik also worked on Diablo and Diablo II. Fortunately, Marvel Heroes is distinctive enough on its own thanks to the cast of playable characters at Gamescom, including Wolverine and Hulk. It also helps that Marvel Heroes feels like a high-quality release--it looks gorgeous thanks to Unreal Engine, there's over an hour of animated comic-book-style movies, and it's being written by Marvel regular Brian Michael Bendis.

The competition is heating up in the free-to-play first-person shooter market. While Team Fortress 2 remains one of the most popular games in the genre, new entrants such as Crytek's Warface are bringing high-level engines such as CryEngine 3. Nexon's Shadow Company is another shooter powered by big-name tech, this time Unreal Engine 3. As a result, Nexon says to expect a 2GB download for the client. It looks the part, but Nexon is more keen to talk about bespoke game modes such as the Battle Squad mode, which supports two to four teams of up to six players each on one map. 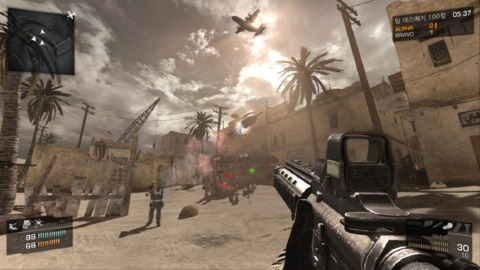 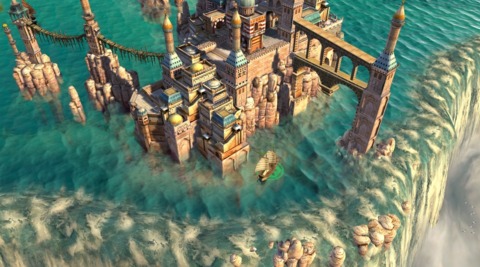 Best Excuse to Sing "I'm on a Boat"

If there's a theme in free-to-play gaming at this year's Gamescom, it's that production values are going higher and higher. Kartuga is a handsome-looking pirating action game from Hamburg-based Ticking Bomb that uses the Unity engine to great effect, both technically and artistically. The PVP game modes will be the focus, including domination and bomb the base, but PVE will play a role as well. Premium items will consist of premium ships (a ghost ship, for example, is slated for release in the next six months), and publisher InnoGames has promised a closed and open beta.

And finally, here's our honest-to-goodness favorite F2P title from this year's Gamescom. It's an online mech combat game called Hawken, and it's the sort of thing you have to see in action to fully appreciate. Combatants dash across the battlefield with an incredible amount of speed, immediately setting the game apart from other mech-based titles on the market. Visually gorgeous and full of action, the dystopian sci-fi battle arenas of Hawken are full of customizable class-based mechs going at it in an explosive show of multiplayer mayhem. It's a lot of fun, and we can't wait to play more. 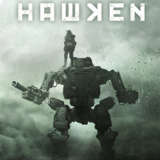