Pair of Madden purchasers going to court over "blatantly anticompetitive conduct" by locking down NFL, NCAA, and Arena Football licenses.

Electronic Arts already has antitrust issues on its plate, given that the company is currently seeking federal approval to acquire Take-Two Interactive. Last week that plate got a little more crowded when a pair of gamers in Washington, DC and California filed suit against the publisher in the US District Court of Northern California, alleging "blatantly anticompetitive conduct" in the way that it has cornered the football-gaming genre.

The class-action complaint focuses on Electronic Arts' actions since 2004, when Take-Two Interactive's NFL 2K5 was released at a $19.99 price point and sold more than 2.9 million copies in the US, according to NPD figures. Take-Two's previous football game, ESPN NFL Football, sold fewer than 450,000 copies in the US. Meanwhile, EA dropped the price of its Madden 2005 from $49.95 to $29.95 in response.

"This vigorous competition benefited consumers," according to the suit. "Electronic Arts could have continued to compete by offering a lower price and/or a higher quality product. Instead, Electronic Arts quickly entered into a series of exclusive agreements with the only viable sports football associations in the United States: the National Football League, the Arena Football League, and NCAA Football."

With no Take-Two competitor the following year, the suit notes that Electronic Arts raised the price of Madden 2006 back to $49.95, an increase of nearly 70 percent. The suit also brings up Electronic Arts' attempted acquisition of Take-Two, saying that it "would remove one of the few companies with the ability and expertise to compete in the market for interactive football software" if EA somehow lost its exclusive deals.

The suit does not address Take-Two's bid to reenter the football market with former player licenses but no professional league attached. That game, All-Pro Football 2K8, sold a little more than 275,000 copies at US retailers, according to the NPD Group.

The plaintiffs are asking for restitution and damages for those who purchased an Electronic Arts football game since August of 2005, disgorgement of all profits made as a result of anticompetitive actions, and that the infringing agreements be declared null and void.

A representatives with Electronic Arts said the publisher could not comment on pending legal matters. The plaintiffs had not responded to GameSpot's requests for comment as of press time. 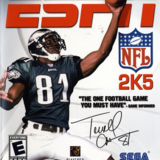 There are 845 comments about this story
Load Comments (845)