Omnipresent heiress is teaming up with French publisher for her own line of cell phone games.

Love her or hate her, there's no denying that Paris Hilton just won't leave the public eye. Besides her omnipresence in supermarket tabloids, the heiress to the Hilton hotel fortune has also appeared in films, has cowritten two books, and is currently putting the final touches on her debut CD. On a more prurient note, she was also the star of a widely circulated XXX-rated video, One Night in Paris.

Hilton has also made her presence felt in games, albeit tangentially. She was among the celebrities invited to help shill the Nintendo DS at the 2006 Sundance Film Festival and was also on hand at the Xbox 360 launch party last May.

Now, it appears Hilton is getting her own game. Today, Paris-headquartered mobile publisher Gameloft announced that is has a deal with the 25-year-old starlet/spokesmodel/amateur adult actress to "develop and produce a series of mobile games featuring Paris Hilton and her likeness." According to a statement issued by the publisher, the first game to feature the Simple Life star "will be geared to tweens/teens." Later games will be aimed at gamers of other ages.

"I'm excited to collaborate with Gameloft to bring the Paris Hilton brand and the glamour of young Hollywood to the cell phones of all my fans around the world," said Hilton in a statement. "My phone has become an all-in-one entertainment device, and mobile games are an integral part of that. Mobile gaming is really hot right now, and I'm excited to be part of this project." 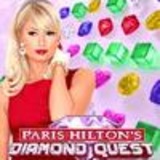