Unless you've been in a darkened room playing Spore with the TV off for the past month, you're probably aware that the US is in the midst of a dire financial crisis. That fact was underlined today when the Dow Jones Industrial Average lost 679 points to end the day at 8,579, or down 7.33 percent. That's the first time since 2003 that the index has closed below 9,000, and was the sixth triple-digit single-day loss in a row. 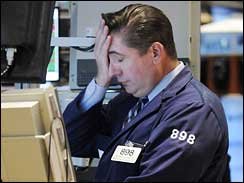 But though the news was grim on the New York Stock Exchange, it was slightly better on the NASDAQ, which saw its composite index fall a still-painful 95.21 points, or 5.47 percent. America's second-largest market is home to many technology stocks, including the majority of third-party video game publishers touted as "recession-proof" by some analysts.

Indeed, comparing the closing September 9 and October 9 share prices of four top publishers, it's clear that some of the biggest names in games are hemorrhaging market value. Worst off is Take-Two Interactive, which has lost 40 percent of its share price in a month, going from $21.77 to $13.01. Besides overall market woes, the decline was also in large part due to Electronic Arts' abandonment of its Take-Two takeover bid, which was $26 per share at its highest point.

Ironically, EA was also a big loser during the Sept. 9-Oct. 9 period. Despite a recent spate of hits such as Spore and Warhammer Online, the publisher's stock value has shrunk 37 percent over the month, going from $44.21 to $27.80. More alarming is the fact that EA's stock value has nose-dived 53 percent in the past year, having been worth $59.94 on October 9, 2007.

The last and least money-losing game company was Activision Blizzard, which shaved 28 percent--$4.67--off of its shares during the month, ending at $11.95. No year-on-year comparisons are available for the newly minted Guitar Hero and World of Warcraft maker, which was formed in July by the union of Activision and Vivendi Games.

Despite the apparent game-industry-wide drubbing, analysts are confident that the game industry will fare better in a recession than other sectors. "If people aren't traveling and stay home, what are they going to do? They'll want relatively cheap home entertainment," David Gibson, senior analyst at Macquarie Research Equities, told the Wall Street Journal. "[And] core gamers will buy the titles when they come out, regardless of economics."

A summary of publishers' September 9-October 9 share-value losses is listed below. Also listed are the publishers' share prices from over a year ago for year-on-year comparison.


CONSOLE MANUFACTURERS (Traded in US)