Pay what you want for Fez and other games, with the proceeds going to the American Civil Liberties Union.

With some video game companies and organizations already having spoken out against the recent immigration ban imposed in the United States, a handful of developers are now responding in a different way.

For a limited time, proceeds from sales of several games, including Fez, are being donated to the American Civil Liberties Union, which has been among the groups contesting the controversial executive order signed last week.

Fez maker Polytron announced the move on Twitter. Fez can be purchased at any price on Itch.io from now until February 6, with all proceeds going to the ACLU. Indie developer Kitty Horrorshow is doing the same thing on Itch.io for the next week, selling a bundle of seven horror games for $1 or more, again with all sales going to the ACLU.

Iranian developer Ink Stories, too, is doing this with its game 1979 Revolution: Black Friday, donating all proceeds between February 1 and February 10 to the ACLU. In a press release, it said, "By donating sales proceeds, Ink Stories endorses the work of the ACLU in hopes of supporting immigrants and refugees rights, by countering the grave and damaging rulings."

Creator Navid Khonsari added, "This is deeply personal, as my family made the hard decision to leave Iran after the revolution, to come to the West, which was the land of inclusion. Today, I feel like I am reliving history. While it's easy to be immobilized by hurt and hopelessness, I believe that now more than ever we are confronted with an obligation, where we must dig in, resist and unite. Silence is not an option—so I commend those in our community who are taking action and hope that other game developers and publishers will join in, as we partake in this crucial movement--coming from all religious, national, ethnic and generational backgrounds to denounce the ban--and stand with humanity, by saying that this is not right, willing to rise up against the injustice."

Earlier this week, the video game trade association responsible for E3 spoke about the issue, saying its "companies rely on the skilled talent of US citizens, foreign nationals, and immigrants alike." Separately, Insomniac Games released a video statement in which it said it "stand[s] united in strongly opposing President Trump's immigration ban." The Game Developers Conference and International Game Developers Association have similarly decried the ban, and EA's CEO wrote a letter to the company's employees to assuage any fears over the news.

Rami Ismail, co-founder of Nuclear Throne developer Vlambeer, wrote a piece for the Guardian that shares his perspective as a Muslim game developer. Vlambeer also donated all revenue from its merchandise and games to ACLU over a 24-hour period, raising just over $13,000. 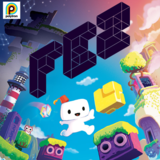