Fans of the Fullmetal Alchemist series don't have to wait any longer for the next installment. Square Enix announced that Fullmetal Alchemist and the Broken Angel has shipped the anime-inspired action RPG to North American stores. Rated "T" for Teen, the game will retail for $39.99, and it is exclusive to the PlayStation 2.

Fullmetal Alchemist and the Broken Angel continues the adventure of the Elric brothers, Alphonse and Edward, a pair of talented alchemists who do what alchemists do best--namely, transmute one object into another. However, the brothers Elric are far from your average bookish types. In the previous game, both were severely injured to the point where parts of their anatomy--and in Alphonse's case, his entire body--were replaced by metal armor. Using their alchemy skills and artificial limbs (which double as weapons), they set out to find the Philosopher's Stone, a magical relic that will be able to change them back to their former selves.

For a complete rundown on Fullmetal Alchemist and the Broken Angel, read GameSpot's full review. 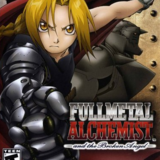