If you're looking at the title Full House Poker and thinking to yourself that it must be the long-overdue poker game starring the Tanner family, you're probably not much of an expert on poker jargon. But that's fine--Full House Poker isn't a game that requires an expert-level card player. It is, after all, a game with an entire button dedicated to pulling open a what-beats-what cheat sheet of poker hands (that would be the left bumper). And of course there's the reassuring fact that you're not actually betting real money. That always helps newcomers feel less intimidated.

But then, if real money isn't on the line, what's the draw? Rewards and competition. Microsoft touts more than 150 possible various rewards to unlock in the game. You've got the types of things you'd expect to earn in a Microsoft-published game, like new avatar items, but there are also a number of other things like in-game costumes for your avatar, new poker tables, and even "chip trick" animations for your avatar to show off his or her nimble fingers at the table. There are also 30-player, three-table tournaments to jump into, so at the very least a skilled player can collect the tears of the defeated, if not money itself.

Aside from that, what you've got is a fairly straightforward Texas Hold 'Em simulator. You can spice up the game a bit by emoting with your Xbox avatar, doing things like adding emotion to your folds, calls, or raises by holding the left trigger to come off as discouraged and timid, or the right trigger to come off as super-aggro. Think of it as bluffing without the human element. Altogether, Full House Poker looks like a pretty full-featured package. There are a number of game modes and a slick presentation, and perhaps best of all, you can make your avatar look like it's angry enough to flip over the table on command. You can expect to see the game released within the next few months on Xbox Live Arcade. 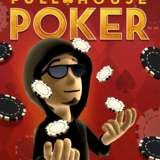